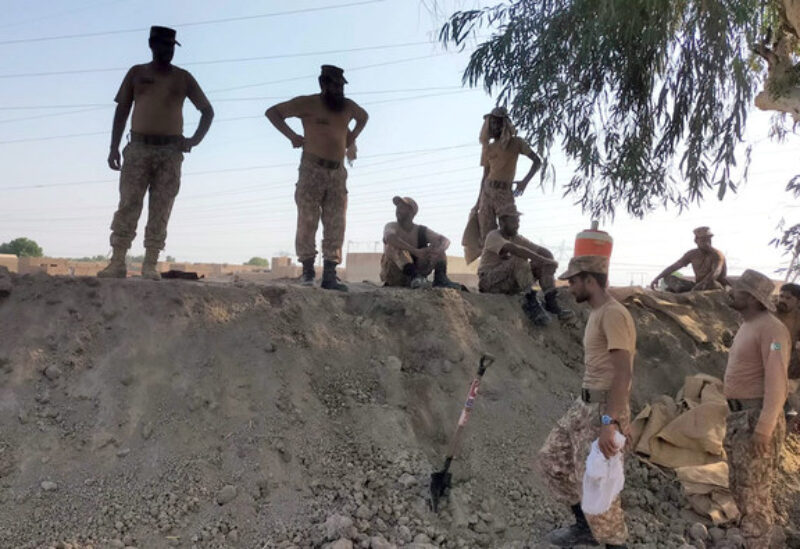 Members of Pakistan's Army guard and look after a dike to protect a power station, following rains and floods during the monsoon season, in Dadu, Pakistan on September 11, 2022. (ISPR)

Pakistani authorities are rushing to defend a crucial power plant that provides electricity to millions of people from the growing threat of flooding, according to officials.

33 million people have been affected by floods caused by unprecedented monsoon rains and glacial melt in the mountainous north, which have killed nearly 1,400 people and caused $30 billion in damage to homes, roads, railways, livestock, and crops.

Both the government and the UN secretary general, António Guterres, have blamed climate change for the extreme weather that led to the flooding that submerged huge areas of the nation of 220 million.

The electricity station in the district of Dadu in the southern province of Sindh, one of the country’s worst affected areas, supplies power to six provincial districts.

Troops were busy strengthening a dike built in front of the station, a visit to the site showed on Sunday.

“All preventive measures have been taken already to save the grid in case any flooding happens,” Syed Murtaza Ali Shah, a top district official, told Reuters on Monday.

The comment followed orders from prime minister Shehbaz Sharif, reported by state broadcaster Radio Pakistan, to ensure the 500kV power station did not get flooded.

On Monday, a dust storm in nearby Sehwan town uprooted hundreds of tents pitched at roadsides by people made homeless by the floods, as a fresh spell of rains expected in the middle of the month begins to set in, officials said.

“If rains come where would we go – we are sitting under open sky, we don’t know what to eat, what to cook,” Muhammad Hasan, one of those affected by the storm, told Reuters.

“All the tents got uprooted by strong winds today, we do not know where to go. We are desperate.”

The Pakistan Meteorological Department said on Monday it expects more rain in the area in the next few days, posing a new threat to displaced people living in tents or in the open along raised highways.

UN agencies have begun work to assess the South Asian nation’s reconstruction needs after it received 391 mm (15.4 inches) of rain, or nearly 190% more than the 30-year average, in July and August.

Sindh received 466% more rain than average and all the flood waters pass through Dadu, a district with a population of 1.5 million, because of its location.