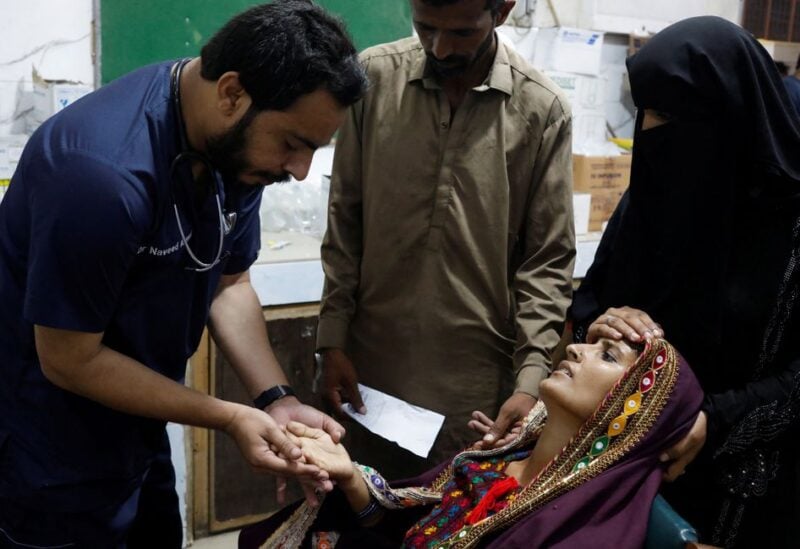 The emergency ward of Sehwan’s major government hospital in southern Pakistan is overcrowded.

During a recent visit, Reuters saw hundreds of people jammed into rooms and hallways, anxious for treatment for malaria and other ailments that are spreading rapidly in the aftermath of the country’s worst floods in decades.

Naveed Ahmed, a young doctor in the Abdullah Shah Institute of Health Sciences’ emergency response section, is besieged by five or six individuals trying to obtain his attention.

The 30-year-old keeps his cool as stretched emergency services struggle to cope with thousands of patients arriving from miles around after their homes were submerged under water when heavy rains fell in August and September.

“We become so overworked at times that I feel like collapsing and going on an intravenous drip,” a smiling Ahmed told Reuters as he sipped a cup of tea in the hospital’s canteen during a short break.

“But it’s because of the prayers of these patients that we keep going.”

Ahmed is on the frontline of the battle to limit sickness and death across southern Pakistan, where hundreds of towns and villages were cut off by rising waters. The deluge has affected around 33 million people in a country of 220 million.

Most of the estimated 300-400 patients arriving at his clinic each morning, many of them children, are suffering from malaria and diarrhea, although with winter approaching, Ahmed fears other illnesses will become more common.

“I hope people displaced by the floods can get back to their homes before winter; (if not) they will be exposed to respiratory illnesses and pneumonia living in tents,” he said.

Hundreds of thousands of Pakistanis who fled their homes are living in government camps set up to accommodate them, or simply out in the open.

Stagnant floodwaters, spread over hundreds of square kilometres (miles), may take two to six months to recede in some places, and have already led to widespread cases of skin and eye infections, diarrhoea, malaria, typhoid and dengue fever.

The crisis hits Pakistan at a particularly bad time. With its economy in crisis, propped up by loans from the International Monetary Fund, it does not have the resources to cope with the longer term effects of the flooding.

Nearly 1,700 people have been killed in the floods caused by heavy monsoon rains and melting glaciers. Pakistan estimates the cost of the damage at $30 billion, and the government and United Nations have blamed the catastrophe on climate change.

Over 340 people have died of diseases caused by the floods, authorities have said.