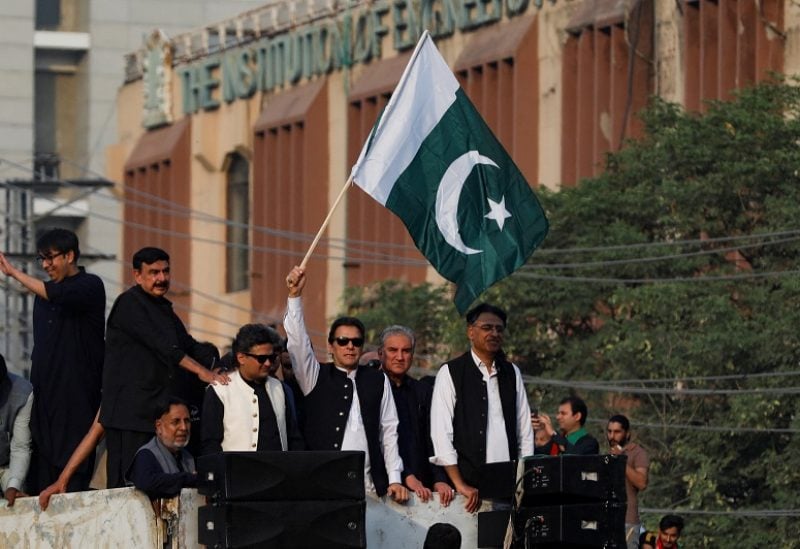 Demanding early elections, and challenging the government of his successor, Pakistan’s former Prime Minister Imran Khan and thousands of supporters started a long-promised march on Friday to the nation’s capital, Islamabad.
Khan maintains that his ouster in a parliament no-confidence vote in April was unlawful, and a conspiracy by his political opponents orchestrated by the United States — a charge denied by both Washington and Pakistan’s new premier, Shahbaz Sharif.
Khan’s march has the potential to spark violence, which would plunge the impoverished country, still reeling from unprecedented floods over the summer that killed 1,731 people and displaced hundreds of thousands from their homes, further into turmoil.
About 10,000 demonstrators, many of them piled into hundreds of trucks and cars, left Friday from the eastern city of Lahore, Pakistan’s cultural heartland. Many who joined the march at the start were walking on foot. The convoy, which was expected to arrive sometime next week in Islamabad, got off to a colorful start as Khan’s supporters danced to the beat of drums and sang patriotic songs.
The convoy’s route — known as the Grand Trunk Road — covers a distance of 300 kilometers (187 miles) and is expected to include frequent stops, with political speeches and rallies in towns and urban areas along the way.
Numbers are also expected to swell along the way — Khan, a former cricket star and national sports hero turned Islamist politician, is hugely popular and has been able to rally followers to the streets.
Addressing supporters before the departure from Lahore, Khan described the endeavor as a “peaceful march” and claimed his political struggle against the government would continue until Sharif’s administration agrees to hold early elections. The government has repeatedly said the elections will be held as scheduled, in 2023.
On Thursday, Pakistan’s powerful military warned that although it was Khan’s democratic right to hold a rally in Islamabad, no one would be allowed to destabilize the country. The military has ruled the country for more than half of its 75-year history since its independence in 1947 from British colonial rule.
Last week, the country’s Election Commission disqualified Khan from holding public office for five years, after finding him guilty of illegally selling state gifts and concealing assets as premier. Khan has challenged the ruling in court, seeking to have the commission’s order suspended.
Authorities in Islamabad have deployed additional security forces to deter any clashes or violence once Khan’s convoy reaches the Pakistani capital.