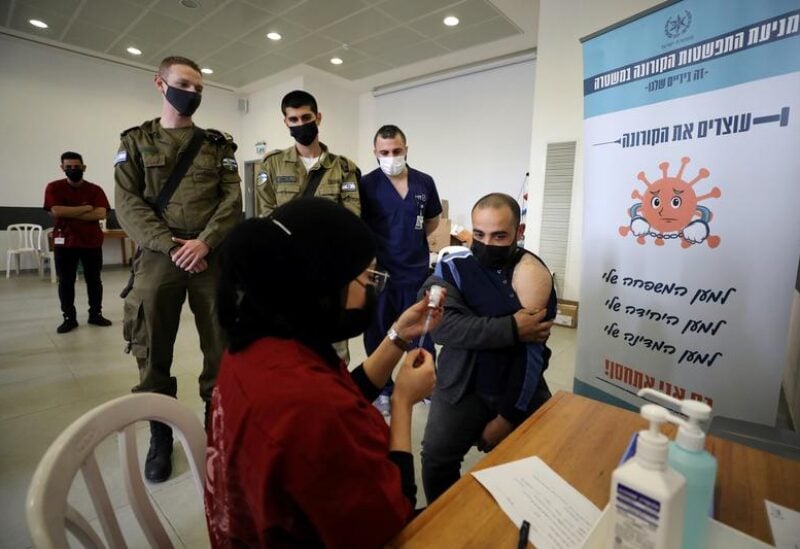 FILE PHOTO: A Palestinian laborer who works within Israel or its settlements in the occupied West Bank, is vaccinated at an Israeli facility at Shaar Efraim crossing from Israel to the West Bank, March 8, 2021.

Palestinian hospitals are overfull and intensive-care units operating at 100% capacity with COVID-19 patients in some areas of the Israeli-occupied West Bank, Prime Minister Mohammad Shtayyeh said on Tuesday.

Palestinian cities have introduced full lockdowns over the last 2 weeks to curb the spread of coronavirus infections, even as neighboring Israel has started to lift restrictions as it proceeds with one of the world’s fastest inoculation campaigns.

“The percentage of hospital occupancy in some areas has hit more than 100%,” Shtayyeh said in Ramallah, one of the West Bank cities where his Palestinian Authority (PA) exercises limited self-rule.

The West Bank and Gaza, home to a combined 5.2 million Palestinians, have received nearly 34,700 vaccine shots to date. These came from small donations by Israel and Russia as well as 20,000 sent by the United Arab Emirates to Gaza.

Meanwhile in Israel, restaurants reopened on Sunday as the country kept up a fast pace of mass vaccinations.

“I brought millions of doses, now I’ll have to bring tens of millions of doses. I am currently in talks with Pfizer and Moderna to bring more,” Prime Minister Benjamin Netanyahu told Israel Army Radio, campaigning ahead of a March 23 election.

Israel has given 53% of its 9 million population at least 1 dose of the Pfizer/BioNTech COVID-19 vaccine, according to Health Ministry data, and 38% have received both shots.

The contrast has not gone unnoticed among Palestinians.

Israel extended its inoculation program on Monday to include Palestinian laborers who work in Israel and in its West Bank settlements.

Many Palestinians argue that Israel is neglecting its obligations as an occupying power by not including them in the mass vaccination roll-out.

“The number of vaccinations in Israel is really high,” Saji Khalil, 75, told Reuters. “Even the Palestinian laborers whom they inoculated, they did it to serve the Israeli community, not to look out for the well-being of the laborers.”

Israeli officials say that under the 1990s Oslo interim peace accords, the Palestinian Authority is responsible for vaccinating its population.

Many Palestinians are dissatisfied with their leaders. Last week, the PA came under fire from rights groups after admitting that it had sent 10% of the coronavirus doses that it received to VIPs.

Firas Narawesh, from Ramallah, said the government had failed to provide vaccinations to ordinary Palestinians, and had “distributed vaccinations in an unfair way and in an unequal way with clear favoritism and corruption.”