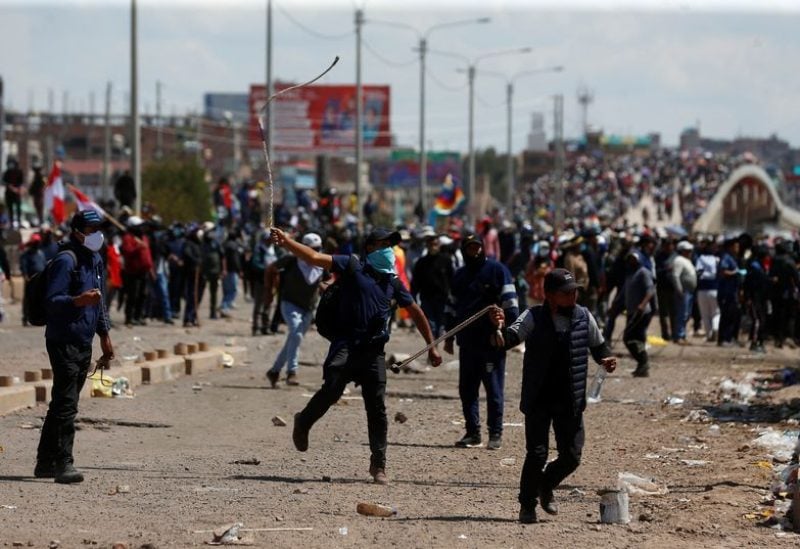 Demonstrators clash with security forces during a protest demanding early elections and the release of jailed former President Pedro Castillo, near the Juliaca airport, in Juliaca, Peru January 9, 2023. REUTERS/Hugo Courotto NO RESALES. NO ARCHIVES

In the biggest outbreak of violence the Andean nation has seen in more than 20 years, Peruvians in the southern Puno region carried coffins through the streets on Wednesday in memory of the 17 citizens who perished in protests in the area earlier this week.

Since the unexpected removal of socialist President Pedro Castillo in early December, the nation has been torn apart by protests, which have resulted in the deaths of 40 people, nearly half of whom occurred on Monday in the city of Juliaca, including one police officer.

Hundreds of people in the city paid tribute to the dead by carrying coffins through the streets before their burial along with photos of the faces of the victims, flowers, Peruvian flags, and banners blaming the new government for the violence.

“The bloodshed will never be forgotten,” some shouted while carrying black flags at a march in the region that borders Bolivia and was the focus of the most recent protests.

The violence, a severe test for Peru’s democracy, is the worst conflict since the late 1990s when the country was gripped by violence between rebel group Shining Path and the state, which left 69,000 people dead or missing over two decades.

Protests in 2009 saw 33 Peruvians killed after indigenous groups in the northern jungle region clashed with police during the government of former President Alan García.

Protesters are calling for the resignation of new President Dina Boluarte, quick general elections, a new Constitution and the release of Castillo, who was ousted and arrested for “rebellion” after trying to illegally shutter Congress.

‘LISTENING TO ALL VOICES’

On Wednesday a mission from the Inter-American Commission on Human Rights (IACHR) met Boluarte, whose Cabinet survived a confidence vote by Congress on Tuesday, to assess the crisis.

“We will be verifying the human rights situation, the idea is to hear from the broadest possible range of all voices,” IACHR representative Edgar Stuardo Ralón told reporters.

Boluarte, facing a preliminary investigation by state prosecutors over the deaths, said in a statement after the meeting that the government would give the commission all the support needed to find out what had happened.

Peruvian police and armed forces have been accused by human rights groups of using deadly firearms and launching tear gas canisters from helicopters. The army says, for its part, that the demonstrators have used weapons and homemade explosives.