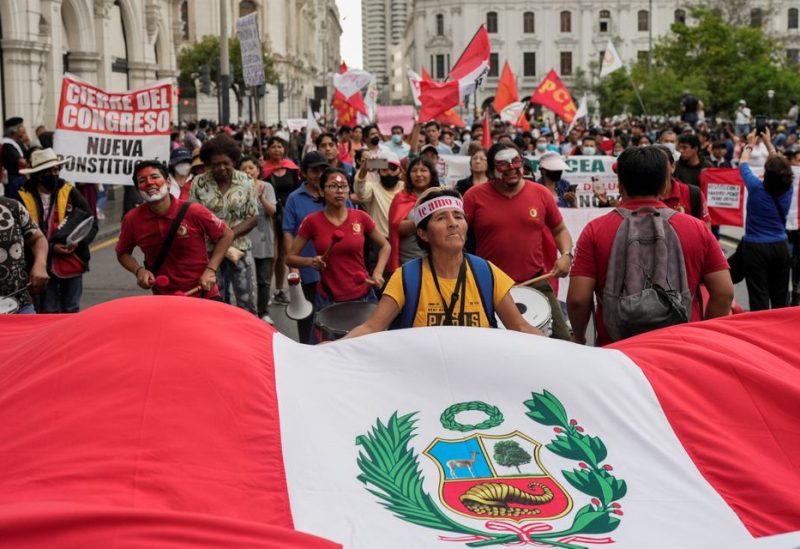 People participate in a demonstration demanding the dissolution of Congress and to hold democratic elections, rather than recognize Dina Boluarte as Peru's President, after the ouster of former President Pedro Castillo, in Lima, Peru, January 4, 2023. REUTERS/Angela Ponce

Thousands of people flocked to the streets on Wednesday, two weeks after a wave of fatal protests over the removal of former President Pedro Castillo, and police used tear gas to disperse them as they attempted to approach the Peruvian Congress building.

Though the transportation authorities reported 35 blockade points across the nation, there were no reports of violence by early evening with the police who had barred entry to Congress.

On Wednesday, protesters marched in Lima and Arequipa, many carrying the country’s red-and-white flag, and demanded the resignation of current President Dina Boluarte, closure of Congress, changes to the constitution and Castillo’s release.

Meanwhile, authorities said trains to the Inca citadel of Machu Picchu had been suspended, a day after some 2,062 tourists were evacuated.

Prime Minister Alberto Otarola had earlier called for demonstrations to be peaceful.

Castillo is serving 18-month pretrial detention while he is investigated for “rebellion,” a charge the former president denies. He was ousted after he tried to illegally dissolve Congress and reorganize the judiciary.

Boluarte, a former vice president who assumed power shortly after Castillo’s removal, has proposed bringing forward the next general elections.

Television footage earlier on Wednesday showed police and the army guarding headquarters of public institutions in some areas where protests were planned, including Ayacucho, a region with the highest number of victims in the December demonstrations.

On Tuesday, thousands of people had marched in Lima and elsewhere demanding “peace and tranquility.”

Boluarte installed on Wednesday morning a “Monitoring and Crisis Control” center, together with the defense and interior ministers.

“I call for peace, calm, and unity to boost the development of the homeland,” she said in a speech.

Sergio Belloso, the vice-president of Peru’s hotels and restaurants association, said the lack of tourists in 2022 caused by the political and social crisis had cost the country some $2.5 billion.