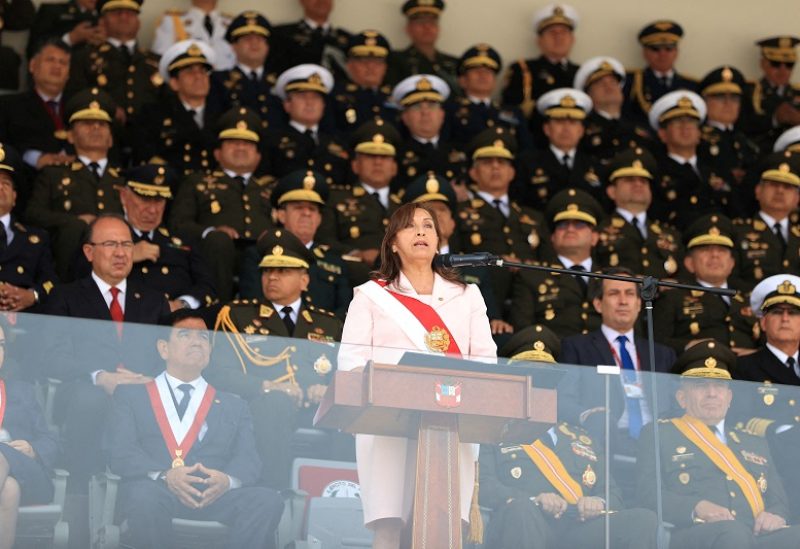 Peru's President Dina Boluarte speaks during a ceremony to commemorate the Day of the Peruvian Army and the anniversary of the Battle of Ayacucho, in Lima, Peru, December 9, 2022. Peru's Presidency/Handout via REUTERS

Peru has been wracked by unrest since the arrest of former President Pedro Castilo — the country’s first president with an Indigenous heritage — earlier this month.

Message to Congress — and protesters
Boluarte spoke in a televised address to the nation and expressed regret for the protests and the deaths, most of which happened in clashes with security forces. Peru’s military has been authorized to impose order under a state of emergency.

But Boluarte, Peru’s first female president, said her resignation would not resolve the situation, instead putting the pressure on Congress.

“What is solved by my resignation? We will be here, firmly, until Congress determines to bring forward the elections,” Boluarte told Peruvians.

She urged Congress to take notice of opinion polls that show more than 80% of Peruvians want general elections, for both a new president and Congress, to stabilize the country.

“Don’t be blind,” Boluarte said. “Look at the people and act in line with what they are asking.”
Boluarte, who was the running mate of the outsider Castillo during his shock victory last year, denied accusations that she had been opportunistic in replacing him. Castillo himself has labeled her a “usurper.”

The leftist ex-president, who has much of his power base in rural Indigenous areas, had tried to dissolve Congress. The country’s Supreme Court deemed that act unconstitutional, and on Thursday ruled that Castillo should be detained for at least 18 months.

“I didn’t look to be here,” said the president. “I tried to protect him as much as I could,” referring to attempts by Congress to impeach Castillo for alleged corruption. Boluarte also said there would be a reshuffling of her Cabinet after the resignations of the education minister and culture minister on Friday.

There have been protests in support of Castillo across Peru, but particularly in Indigenous communities from Peru’s Amazon and Andean regions.

Boluarte, herself from a humble background in the Andes, at one point broke into Quechua, the main Indigenous language in Peru, to appeal for an end to violence and road blockages.

The protests have affected thousands of tourists, with the passenger train that carries visitors to the Inca citadel of Machu Picchu suspended.

Some of the demonstrators have put roadblocks in place on the Pan-American Highway, stranding goods trucks for days bound for the capital for days.