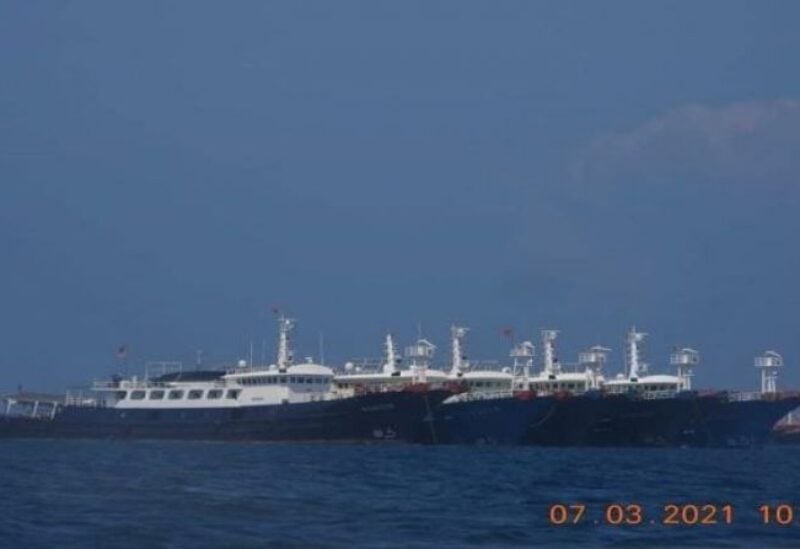 The Philippines complained to China on Monday about what it described as the “swarming and threatening presence” of Chinese vessels in disputed waters in the South China Sea and demanded they be withdrawn from the area.

Philippine officials reported about 220 vessels, believed to be manned by Chinese maritime militia personnel, were seen anchored at the Whitsun Reef, which Manila calls the Julian Felipe Reef, on March 7.

The Chinese Embassy in Manila said on Monday the boats spotted were fishing vessels and were taking shelter due to rough sea conditions.

“The continued deployment, lingering presence and activities of Chinese vessels infringe upon Philippine sovereignty,” the Philippine foreign ministry said in a diplomatic protest, adding “their swarming and threatening presence creates an atmosphere of instability.”

The Chinese Embassy in Manila rejected the accusations.

“There is no Chinese maritime militia as alleged. Any speculation as such helps nothing but causes unnecessary irritation,” it said in a statement.

Philippines Defense Secretary Delfin Lorenzana said the presence of militia boats was a “clear provocative action of militarising the area” and urged China to recall the vessels.

The U.S. Embassy in Manila said the Chinese boats had been mooring in the area for many months in increasing numbers, regardless of the weather, and accused China of using its maritime militia to “intimidate, provoke and threaten other nations.”

An international tribunal invalidated China’s claim to 90% of the South China Sea in 2016, but Beijing does not recognise the ruling and has built islands in the disputed waters equipped with radar, missiles batteries and hangers for fighter jets.

Jay Batongbacal, an expert on the South China Sea at the University of the Philippines, said President Rodrigo Duterte’s “friendship policy” to move away from Washington and align more closely with China was to blame for the incursions.

“Whatever opportunities there were for us to slow them down or stop them they have been lost,” Batongbacal said.

China claims almost all of the energy-rich South China Sea, which is also a major trade route. The Philippines, Brunei, Vietnam, Malaysia and Taiwan have overlapping claims.