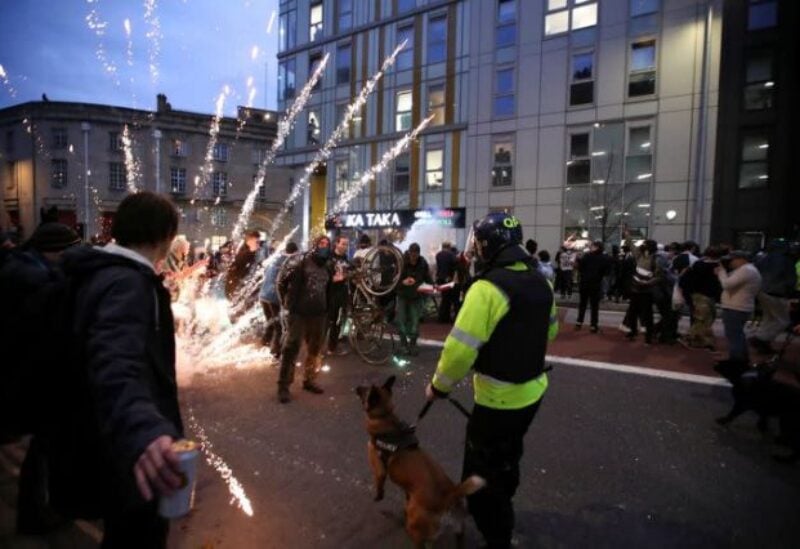 Two police officers were seriously injured and at least two police vehicles were set on fire in the city of Bristol in southwest England during violent scenes after a peaceful protest, police said.

Thousands of demonstrators had converged on the city center, ignoring COVID-19 restrictions, to protest against a government bill going through parliament that would give police new powers to restrict street protests.

The local force, Avon and Somerset Police, said the demonstration began peacefully but was later turned into a violent disorder by a small minority.

Home Secretary Priti Patel, the Interior Minister, said on Twitter that the scenes in Bristol were unacceptable.

“Thuggery and disorder by a minority will never be tolerated,” she said. “Our police officers put themselves in harm’s way to protect us all. My thoughts this evening are with those police officers injured.”

Two officers were taken to hospital, one with a broken arm and another with broken ribs, while others were subjected to violence and verbal abuse. The outside of a police station in the city center was vandalized.

Avon and Somerset Police said it had requested help from neighboring forces to bring the situation under control.

“All those involved in this criminal behavior will be identified and brought to justice. There will be significant consequences for behavior such as this,” Avon and Somerset’s chief superintendent, Will White, said in a statement.

A Reuters photographer at the scene saw some demonstrators launch fireworks towards police officers, try to knock over a police van, scale the outside wall of a police station and spray graffiti on it.

He also saw police, some in full riot gear, using batons and shields to try to repel protesters.

Some demonstrators carried placards with slogans such as “Kill the Bill”, “The Day Democracy Became Dictatorship” and “We Can’t Be Silenced That Easy”.

The government’s Police, Crime, Sentencing and Courts bill would give police new powers to impose time and noise limits on street protests.

That has angered activists, particularly since a heavy-handed police response to a London vigil for murder victim Sarah Everard on March 13 caused widespread outrage and criticism of the police.

A serving police officer has been charged with Everard’s kidnap and murder, and the case has unleashed an outpouring of grief and rage over the issue of violence against women and girls.

The government bill pre-dated the Everard case and covers a wide range of policy areas as well as the policing of protests. However, the two became connected in many people’s minds because, by coincidence, the bill was up for debate in parliament two days after the London vigil.