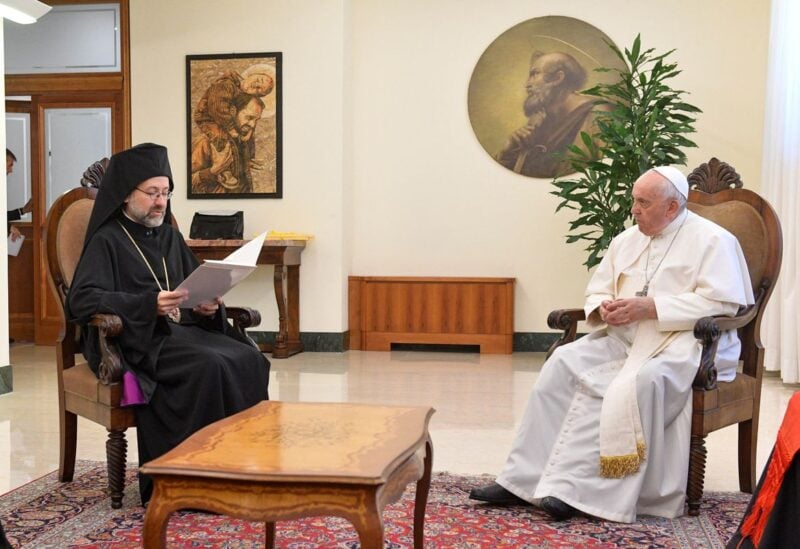 Pope Francis meets with Job Getcha, Eastern Orthodox archbishop of Telmessos, during a private audience, as part of their delegation of the Ecumenical Patriarchate of Constantinople, at the Vatican June 30, 2022. Vatican Media/­Handout via REUTERS

Pope Francis called the conflict in Ukraine a “cruel and senseless act of aggression” on Thursday, and impliedly accused Russia of “armed conquest, expansionism, and imperialism.”

Speaking in front of an Orthodox delegation in Rome, the pope described the fight as one that pits Christians against one another.

Both Russia and Ukraine are predominantly Orthodox Christian but there is a sizeable Catholic minority in Ukraine.

“Reconciliation among separated Christians, as a means of contributing to peace between peoples in conflict, is a most timely consideration these days, as our world is disrupted by a cruel and senseless war of aggression in which many, many Christians are fighting one another,” the pope said.

The Eastern and Western branches of Christianity separated in the Great Schism of 1054.

The pope also told his Orthodox visitors, in a clear reference to Russia, that all needed “to recognise that armed conquest, expansionism and imperialism have nothing to do with the kingdom that Jesus proclaimed”.

It was the second consecutive day that the Pope spoke on the Ukraine conflict. On Wednesday he condemned the bombing of a crowded shopping centre in the city of Kremenchuk, the latest in string of “barbarous attacks” against Ukraine.