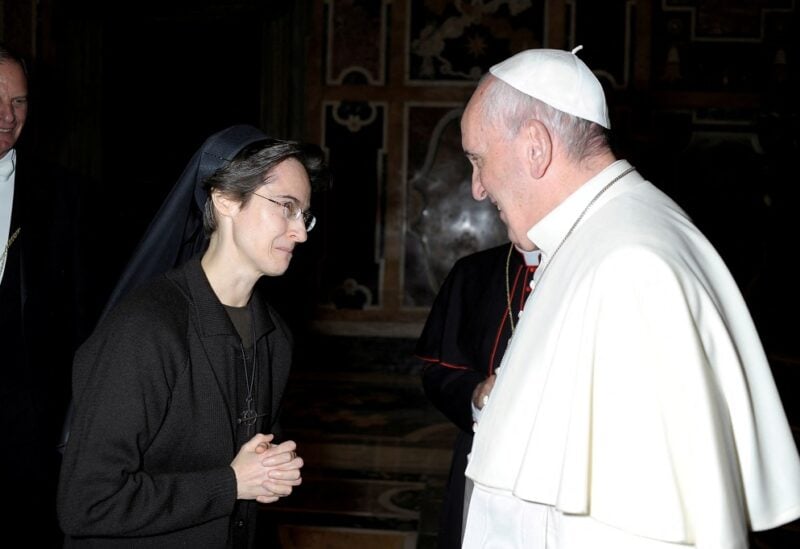 Italian nun Sister Raffaella Petrini, who is the first woman to be appointed as the number two position in the governorship of Vatican City, is greeted by Pope Francis in this undated handout photo released by the Vatican on November 5, 2021. Vatican Media/Handout via REUTERS

The Vatican announced on Wednesday that Pope Francis has appointed three women—two nuns and a laywoman—to a formerly all-male group that assists him in choosing the world’s bishops.

In an exclusive interview with Reuters earlier this month, Pope had made the announcement, emphasizing that he wished to give women more high and powerful posts in the Holy See.

The three women are sister Raffaella Petrini, an Italian who is currently the deputy governor of the Vatican City, French nun Yvonne Reungoat, a former superior general of a religious order, and an Argentine lay woman Maria Lia Zervino, president of the World Union of Catholic Women’s Organizations, UMOFC.

The three women were among 14 people appointed to the Dicastery for Bishops, which vets candidates and advises the pope on which priests should become bishops.

The other 11 appointed on Wednesday were cardinals, bishops and priests.

Terms last for five years. Before Wednesday’s announcement of the 14 names, there were more than 20 members. The total fluctuates as terms expire but usually the committee numbers between about 25-30.

The process starts locally where bishops suggest to archbishops the names of priests they think would make good bishops.

The list then goes to the Vatican nuncio, or ambassador, in a country, who further investigates the person and sends his recommendations to the Vatican.

The members of the committee, who come from around the world, meet in Rome about twice a month and send their recommendations to the pope, who makes the final decision.

“This way, things are opening up a bit,” Francis said in the July 2 interview with Reuters in his residence, when he disclosed his decision to name women to the decision-making part of the bishops department.

Apart from Petrini, who as deputy governor is the most powerful woman in the world’s smallest state, Francis has already named a number of women, both nuns and lay women, to Vatican departments.

Last year, he named Italian nun Sister Alessandra Smerilli to the number two position in the Vatican’s development office, which deals with justice and peace issues.

In addition, Francis has named Nathalie Becquart, a French member of the Xaviere Missionary Sisters, as co-undersecretary of the Synod of Bishops, which prepares major meetings of world bishops held every few years.