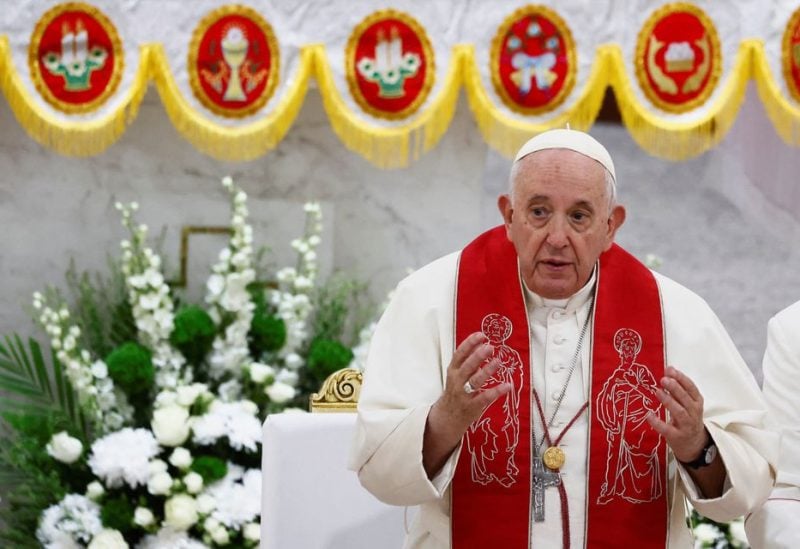 Pope Francis attends a meeting and an Angelus prayer with bishops, priests, consecrated persons, seminarians and pastoral workers at Sacred Heart Church, on the last day of his apostolic journey, in Manama, Bahrain, November 6, 2022. REUTERS/Yara Nardi

Pope Francis wound up his trip to Bahrain on Sunday by visiting the oldest Catholic church in the Gulf, telling bishops, priests and nuns to remain united as they ministered to the faithful in the majority Muslim area.

The last event of his four-day trip took place at Sacred Heart church, built in 1939 on land donated by the then-ruler, putting Bahrain on the road to becoming one of the most accommodating countries in the region for non-Muslims.

Bahrain has two Catholic churches, including a modern cathedral that is the largest church on the Arabian Peninsula, and has about 160,000 Catholics, most of them foreign workers. Many Catholics also visit from neighbouring Saudi Arabia, which bars public worship by non-Muslims.

Francis, who suffers from a knee ailment that forced him to use a wheelchair during the trip, told local Catholic leaders to avoid factions, quarrels and gossip.

“Worldly divisions, but also ethnic, cultural and ritual differences, cannot injure or compromise the unity of the Spirit,” he told them.

There are around 60 priests working among an estimated 2 million Catholics spread across four countries in North Arabia, said Bishop Paul Hinder, the Vatican’s apostolic vicar for the area, citing sometimes “very difficult conditions” for those who serve the community due to restrictions in some states.

The pontiff’s visit, only the second by a pope to the Arabian Peninsula, drew attention to tensions between Bahrain’s Sunni Muslim monarchy and the Shi’ite opposition that accuses the government of overseeing human rights abuses, a charge authorities deny.

The pope stressed human rights in his first address in Bahrain, speaking against the death penalty and calling for “ensuring respect and concern for all those who feel most at the margins of society, such as immigrants and prisoners”.

Foreigners, mostly low-paid migrant workers, form the backbone of economies in the oil-producing Gulf region. Thousands of Catholics in Bahrain and from around the Gulf poured into a stadium to hear the Pope say Mass on Saturday.

Later that day relatives of death-row and life-sentence inmates in Bahrain, which crushed a pro-democracy uprising in 2011, held a small protest along the pope’s motorcade route until policemen intervened to end it.

Pope Francis’ visit continues his policy of improving ties with the Islamic world following a historic visit to the United Arab Emirates in 2019.

At the close of an East-West dialogue hosted by Bahrain, the pontiff focused on the role of religions in promoting peace and disarmament. In an apparent reference to the Russian Orthodox Church patriarch, he said religious leaders cannot support wars.

Earlier he touched on the “forgotten war” in Yemen where seven years of conflict between a Saudi-led coalition and the Iran-aligned Houthi group has caused a dire humanitarian crisis.