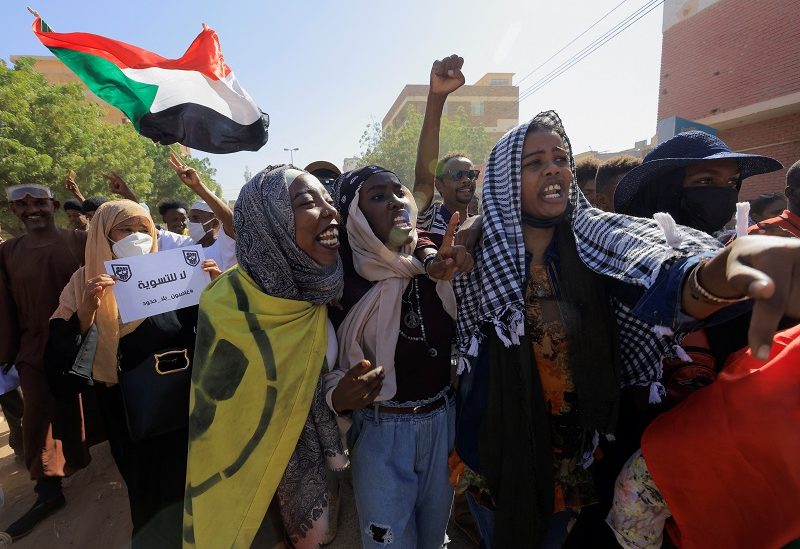 Protesters march during a rally against a signed framework deal between political parties and the military that provides for a two-year civilian-led transition towards elections and would end a standoff triggered by a coup in October 2021, in Khartoum, Sudan December 8, 2022. REUTERS/Mohamed Nureldin Abdallah

Demanding the ouster of its military rulers and rejecting a deal for the gradual transfer of power to civilian leaders, hundreds of protesters took to the streets of Sudan’s capital on Thursday.
Sudan has been in turmoil since an uprising overthrew its longtime autocratic ruler Omar Al-Bashir. A military coup in October 2021 abruptly ended a previous democratic transition agreement with protest leaders.
In Khartoum, demonstrators headed for the Republican Palace, the seat of the ruling military council, before being intercepted by security forces who fired tear gas and water hoses at the crowds. There are no confirmed reports of any casualties.
Thursday’s protest was led by the Resistance Committees, a grassroots group that has steadfastly rejected any negotiations with Sudan’s military leaders, Gen. Abdel-Fattah Burhan and Gen. Mohammed Hamdan Dagalo. The protest group has called for both men, who led last year’s coup, to be tried in court.
On Monday, the two military leaders signed a ‘‘framework agreement” with Sudan’s main pro-democracy group, the Forces for the Declaration of Freedom and Change. But the agreement appears to offer only the vaguest outlines for how the country will resume its road to democracy. Various other political parties and organizations also signed the deal.
The Resistance Committees’ are one of a number of significant political players who have rejected the new agreement. Several former rebel leaders, who have formed their own political bloc, also boycotted the deal.
The agreement between military and civilian leaders also avoided sensitive political issues concerning transitional justice and reforming the military, a policy that promises to see various armed factions within Sudan integrate into one fighting force.
Another uncertainty is how the agreement would balance power between a new civilian government and the military. According to the deal, a reformed military will form part of a “security and defense council” overseen by a new prime minister. However, commentators have cast doubt on whether the military will properly follow through on this pledge.
Further negotiations for a more inclusive agreement are expected.
The United Nations and the US have brokered months of cross-party negotiations in Sudan, along with several other international actors. Both actors have acknowledged the fragility of the agreement and called for further talks.
On Wednesday the US Secretary of State Anthony Blinken threatened to impose a travel ban on any Sudanese figures who try to derail the democratic transition.