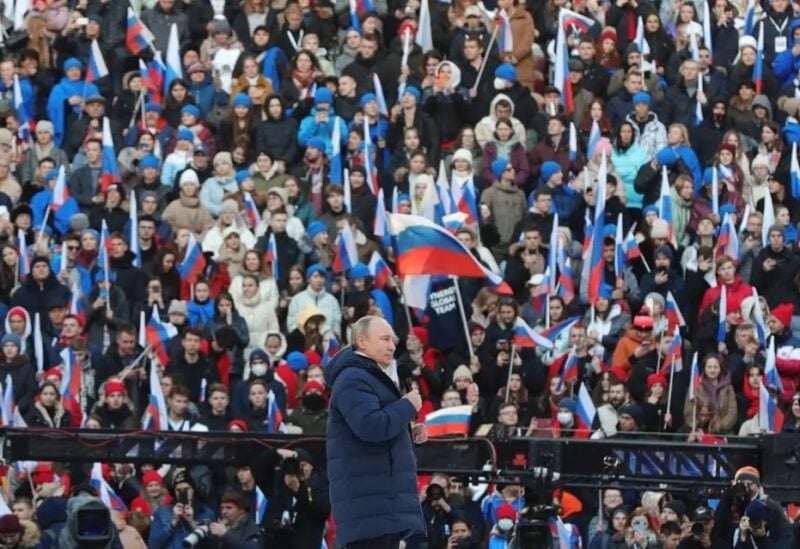 Russian President Vladimir Putin attends a rally marking the eighth anniversary of Russia’s annexation of Crimea at the Luzhniki stadium in Moscow on March 18, 2022

On Friday, Russian President Vladimir Putin used a rally in front of a packed soccer stadium to legitimize his country’s invasion of Ukraine, telling tens of thousands of supporters waving Russian flags that the Kremlin’s goals will be met.

“We know what we need to do, how we’re going to do it, and how much it’ll cost.” And we will, without a doubt, carry out all of our goals,” Putin said at a rally in Moscow’s Luzhniki Stadium.

He claimed that the soldiers fighting in Russia’s “special military operation” in Ukraine had demonstrated the country’s solidarity.

“Shoulder to shoulder, they assist, support, and, when necessary, shelter each other from bullets with their bodies, as if they were brothers.” “We haven’t had such unanimity in a long time,” he says.

State television temporarily moved away from Putin’s remarks to display earlier pre-recorded video of patriotic music, but the Kremlin head returned to the broadcast later.

According to the RIA news agency, Kremlin spokesperson Dmitry Peskov said state television abruptly broke away from Putin due to a technical failure on a server.

Putin claims that the operation in Ukraine was vital because the US was using Ukraine to threaten Russia, and Russia needed to defend itself against Ukraine’s “genocide” of Russian-speaking people.

Ukraine believes it is battling for its survival and dismisses Putin’s charges of genocide. Claims that the West wants to pull Russia apart are false, according to the West.

The words “For a world without Nazism” and “For our President,” employing the “Z” – insignia employed in the military action in Ukraine, were displayed on the stage where Putin spoke.

Before Putin spoke, the powerful national song of Russia, featuring the lines “Russia is our holy state,” blared from the stands of the 2018 Soccer World Cup stadium, along with more modern musical favorites like “Made in the USSR.”

Fyodor Tyutchev’s Pan-Slavist poetry was read, with poems warning Russians that they will always be considered Enlightenment slaves by Europeans.