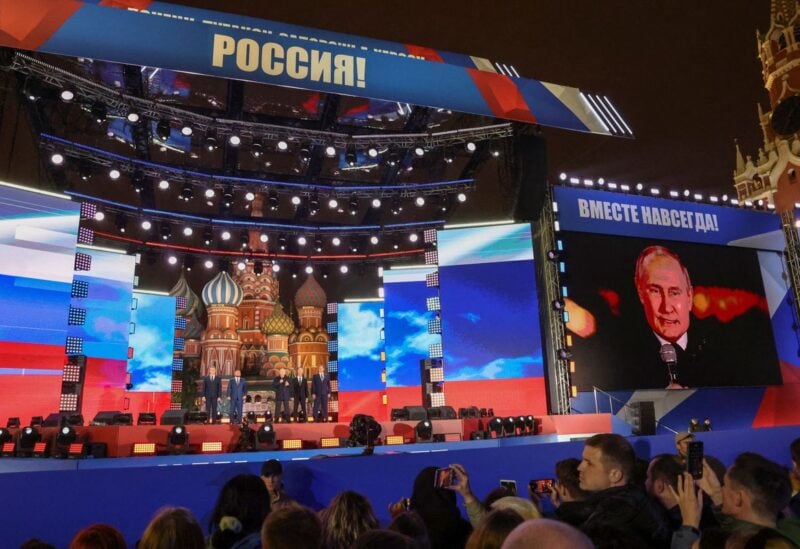 Russian President Vladimir Putin and Denis Pushilin, Leonid Pasechnik, Vladimir Saldo, Yevgeny Balitsky, who are the Russian-installed leaders in Ukraine's Donetsk, Luhansk, Kherson and Zaporizhzhia regions, stand on a stage during a concert marking the declared annexation of the Russian-controlled territories of four Ukraine's Donetsk, Luhansk, Kherson and Zaporizhzhia regions, after holding what Russian authorities called referendums in the occupied areas of Ukraine that were condemned by Kyiv and governments worldwide, in Red Square in central Moscow, Russia, September 30, 2022. REUTERS/REUTERS PHOTOGRAPHER

The performance was arranged in the shadow of the Kremlin walls to commemorate the acquisition of four Ukrainian areas, for which Putin had signed documents a few hours earlier at a ceremony in the Kremlin.

Flanked by the leaders of their Russian-backed administrations, with the multicoloured spires of the 16th-century St Basil’s Cathedral as the backdrop, Putin said people in the regions had made a choice to rejoin their “historic motherland”. He said Russia would do everything to support them, boost their security and rebuild their economies.

“Welcome home!” he said, prompting chants of “Russia! Russia!” from the flag-waving crowd in the vast square.

Huge video screens showed Putin leading the spectators in three cheers of “Hurrah!” for the annexed territories, followed by a rendition of the national anthem.

Kyiv and the West have condemned the “referendums” that Moscow held in the four Ukrainian regions as unrepresentative and bogus, and said they will not give up their efforts to drive Russia out of the territory it has seized.