Refugee crisis worsens amid COVID-19: One pct of all humanity is now displaced 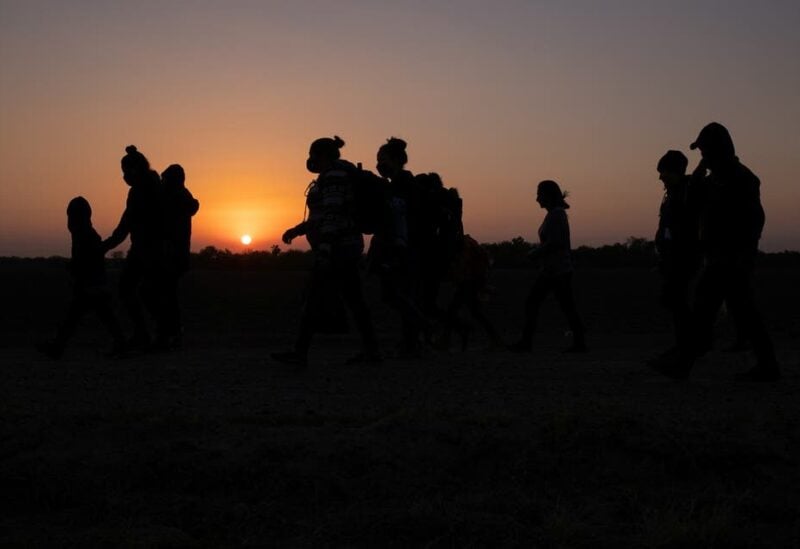 The sun rises as asylum-seeking migrants' families from Honduras and El Salvador walk towards the border wall after crossing the Rio Grande river into the United States from Mexico on a raft, in Penitas, Texas, US, March 26, 2021. (File photo: Reuters)

During 2020, the displacement of sizeable chunks of the global population hit a new high, worsened by the crises brought on by the COVID-19 pandemic.

The number of forcibly displaced people across the world rose to 82.4 million, the United Nation’s Refugee Agency (UNHCR) reported.

This figure accounts for one person for every 95 on Earth. One percent of humans have been displaced due to war, violence or persecution.

It’s a staggering rate considering that 2018 saw an all-time high of 26 million refugees, half of whom were under the age of 18.

More than half of the world’s refugees today come from Afghanistan, Syria and Somalia. None can return home for numerous reasons, but ultimately arriving back to their nations would put them in danger, under international law.

COVID-19 and the refugee crisis

Over 181 million people have been diagnosed with COVID-19, of which more than 3.9 million have died since the pandemic’s onset, according to Worldometer. Refugees are particularly vulnerable.

Rohingya refugees suffered a great deal during this time due to the unsanitary circumstances they have been living in, without access to basic needs such as food, water and appropriate healthcare, Turkey-based news agency TRT World reported.

Although 2020 saw over 160 countries close their borders during the peak of the spread of coronavirus, the number of displaced individuals grew by three million, accounting for a four percent increase from 2019, indicating a constant rise for the ninth consecutive year, the UNHCR reported.

The pandemic made matters worse by eliciting a huge economic downturn that forced many of these vulnerable people into extreme poverty.

Most regions experienced a decrease in arrivals of refugees and asylum-seekers due to border closures, but an additional 2.3 million people became internally displaced within their own countries.

A report released last week by the UNHCR highlighted how drawn-out crises such as those in Syria, Yemen and Afghanistan continued to force people to flee. Other crises also erupted in 2020 and have continued into this year. These include conflicts and clashes in Ethiopia’s Tigray region, northern Mozambique and the Sahel region all of which have caused significant displacement.

Involuntarily repatriating refugees has become common practice whether they are ready to return to their home countries or not. Many rights groups believe that this is a direct violation of their human rights.

In 2020 alone, over one million Afghan migrants in Iran and Pakistan were deported back to their country.

Earlier this year, the Danish government, which has one of Europe’s harshest stances on migration, sent back 94 Syrian refugees, stripping them of their residence permits after declaring parts of Syria were safe enough for them to return.

According to Reuters, Denmark currently limits accepting refugees under the UN’s quota system. The nation, which has gained notoriety for its tough immigration policies over the last decade, passed a law enabling it to process asylum seekers outside Europe, drawing anger from human rights advocates such as the UN and the European Commission. The new legislation is set to further complicate the EU’s efforts to overhaul the bloc’s fragmented migration and asylum rules.

The new law allows Denmark to move refugees arriving on its borders to asylum centers in partner countries to have their cases reviewed, with the possibility of obtaining protection in that country, Reuters reported earlier this month.

The number of refugees seeking asylum in Denmark has dropped to over 1,500 applicants last year from a peak of more than 21,000 in 2015, when more than a million refugees, mostly from the Middle East and Africa, arrived on EU shores.

“Such practices undermine the rights of those seeking safety and protection, demonize and punish them and may put their lives at risk,” UNHCR Assistant High Commissioner Gillian Triggs said.

Human Rights Watch released a report in April which highlighted that Burundian refugees who had left the country back in 2015 following deadly clashes during the presidential election, were subject to enforced disappearances and torture by Tanzanian police, forcing them to ‘voluntarily’ sign up for their return.

Ahmed Muktar, a 64-year-old refugee from Somalia, who returned to his country in 2018 through a voluntary repatriation exercise spearheaded by the UNHCR, said that life in his country of birth was not what he anticipated.

“I had hoped for an improved country, with better security and services, but what we got was different. My mother died shortly after our arrival and as we continued staying, it became harder fending for my family,” he said. “For us who had been repatriated, we get no attention from the UN; new arrivals get better treatment. You can see the environment we are in, we can’t even get a proper shelter.”

“I arrived in Greece in December 2019. I have been here for a year and six months now. When I first arrived in the camp, I was happy. But I felt discouraged with the way things were going on in the camp. The food is not good, there was no water; if it was not MSF, there would be not even water. There was no shelter. I had to struggle to get a place for myself,” Bille, a refugee from the southern part of Cameroon, told NGO Mediecins Sans Frontieres (MSF).

Bille fled to Europe seeking safety after his life was threatened by being caught up in the violence spurred by the linguistic split in the country where its leaders want to separate the English and French-speaking areas of the country, he explained.

“When I first got here, there were four of us and we managed to buy a small place for 300 euros. The money was not there and struggled to gather it. The first fire burned our shelter down. Some friends kept me for some time. I built a second place myself because I am a builder, but the second fire burned it down again. I had to build a shelter for the third time,” he revealed.

“People here are traumatized, mostly because of this development of the new camp. We don’t need the new camp. We have suffered a lot in this place. The best they can do for us is maybe to let us go out of here.”

Mahar, a 26-year-old Syrian refugee who has been in Samos, Greece since September 2019 believes life holds no proper future for him.

“If there was no war in Syria or conflicts, I would never think to come here. But unfortunately, everything is destroyed in Syria. There is no education in Syria right now, no health system, no jobs. Half of my family was killed because of the war. That’s why I decided to leave,” he explained.

“Vathy camp is not even suitable for animals. If you brought cows, goats… they would not be able to live here. Living here, in this camp, is very frustrating and full of despair. There is no safety.”

Another Syrian refugee in Samos, 37-year old Jaber al-Soud left Syria in 2019 seeking a better future and a safe place in Europe for his family and himself. During their journey, his wife, 21, was heavily pregnant with their son, who was born before crossing the sea from Turkey.

“We arrived on Samos on November 2019, after multiple failed attempts to cross the sea between Turkey and Greece. We were scared. We spent approximately 9 hours in the sea but finally we made it to Samos and Vathy camp. But there is no safety here,” Jaber told MSF.

“I feel like we are living in a jungle. There is no electricity. There is no good access to water. I feel like we are animals. You constantly have the feeling you are the target. We are a target of the authorities, we are a target of other people inside the camp. We don’t know if something will happen to us by a friend or by an enemy. We don’t feel safe. We are treated like animals,” he added.

“My wife is attending the mental health clinic of MSF to get psychological care. She is tired and depressed. She never expected that she would need psychiatric medication to cope with life.”

All the evidence, testimonials and reports in the public domain point towards a dire situation for refugees across the world, but there are many ways for countries and individuals to help.

Apart from donating to accredited charities, people and organizations can also donate goods and services to refugees locally because when they are forced to flee, they leave everything behind, including many basic necessities, the UK government’s website dedicate to helping refugees advises.

People can also offer their time and expertise to help refugees learn a language, a practical skill or understand more about the culture of the country they are seeking asylum in. This helps them to better integrate themselves into the new society.

With regards to tackling the issue on a larger scale, governments can incentivize education by offering refugees scholarships to pursue a career. Examples of this have been seen in countries such as Germany and Australia where some universities have been offering refugee students a chance to enroll in higher education, according to American media organization TED ideas.

For donations, UNHCR launched a campaign called ‘Nobody Left Outside’ to help provide shelter for refugees and asylum seekers. People can offer their support through its cash assistance program or on the UNHCR’s main donations page.