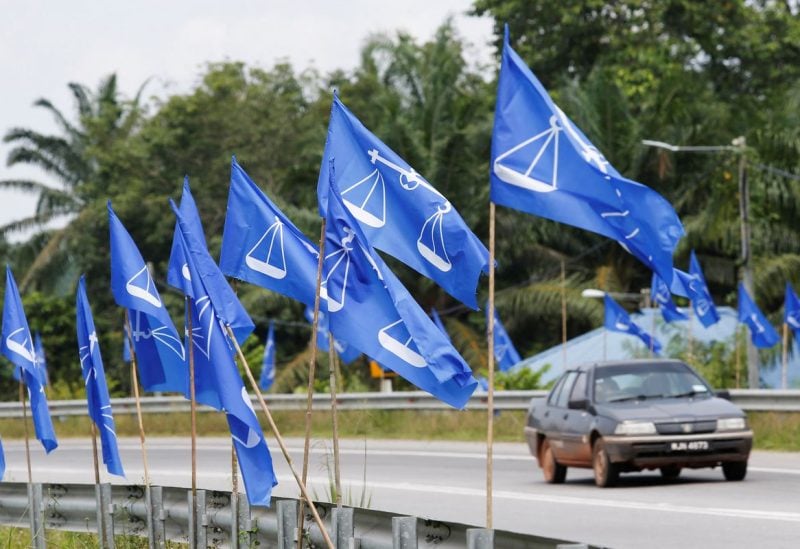 A car is seen behind flags of National Front coalition ahead of the upcoming 15th general election, in Bera, Pahang, Malaysia November 4, 2022. REUTERS/Lai Seng Sin

Malaysia’s opposing political blocs will need to form an alliance to govern after this month’s general election, with none likely to win a simple majority, according to an opinion poll released on Friday.

The Merdeka Center’s Oct 19-28 survey of 1,209 people showed 24% of voters preferred Barisan, while 26% favoured Anwar’s main opposition bloc Pakatan Harapan. Nearly a third – or 31% – were undecided or had no preference.

Since the last election in 2018, Malaysia has had three prime ministers as parties governed with razor-thin and unstable majorities.

Barisan lost for the first time in Malaysian history in 2018 following a multi-billion-dollar scandal at state investment fund 1MDB that plagued its ruling UMNO party, which prioritises interests of the ethnic-Malay majority.

Barisan is seeing lower than expected support among Malays and has not gained significant ground since 2018, Merdeka Center said. The poll showed the economy and inflation were top concerns of respondents, ahead of political instability and corruption.

“It is possible to imagine that no single coalition will attain a large enough plurality to form a government with just one other party or coalition,” Merdeka said.

“Instead, there is a rising possibility that at least three or more parties or coalitions are needed to cooperate to form a government.”

Malays constitute a majority of Malaysia’s voters and are crucial in determining election results, but their vote is now split due to new Malay-centric parties such as those of Muhyiddin and Mahathir.

In Malaysia, the party or coalition with a simple majority in parliament wins, even if it does not win the popular vote.

The opposition coalition that took power in 2018 crumbled in just 22 months due to infighting, returning UMNO to the helm as part of another alliance. UMNO is now seeking to strengthen its hold on power.

Ibrahim Suffian, Merdeka Center director, told Reuters there was no clear-cut group with an advantage because politics was too fragmented, with more new players.

“The big question that people have is how many parties does it need to put together a working government?” he said.