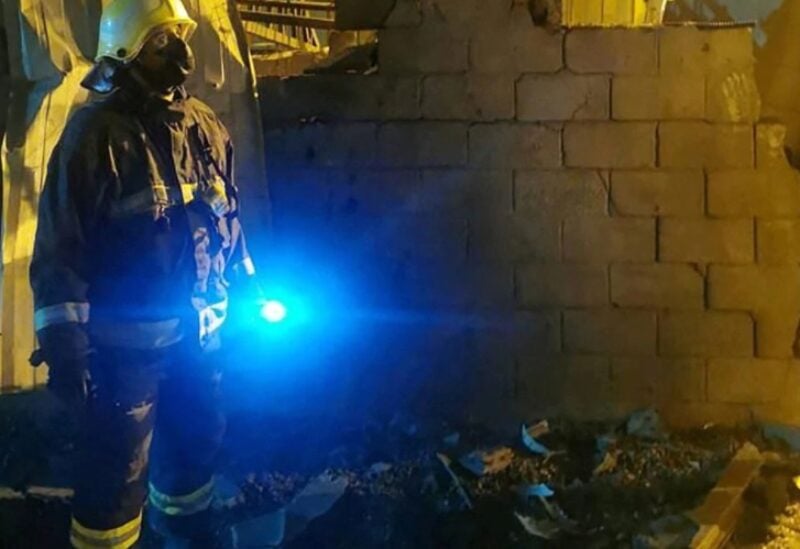 Saudi Civil Defence member is seen at the site of what Saudi-led coalition claims was a drone a attack by Yemen's Iran-aligned Houthi group, that targeted the Al-Shaqeeq desalination plant and the Aramco facility, in Jizan, Saudi Arabia, March 20, 2022. Saudi Press Agency/Handout via REUTERS

The United States has stepped up its military support for Saudi Arabia over the past few months following missile strikes on the kingdom by the Yemeni Houthi group, Western diplomats said, an indication that Washington is trying to mend its strained ties with traditional Gulf allies.

The desire for improved relations has been made more pressing by the Russian invasion of Ukraine last month, which has led to economic sanctions on Moscow by Washington, the European Union and others. The United States and other Western countries have been trying to persuade Saudi Arabia, the world’s top oil exporter, to pump more oil to offset potential losses in Russian supplies.

Even before the invasion on Feb. 24, U.S. officials had been beating a path to Riyadh as Russia built up its troops on the border. The initial response from the Saudis had been cool.

Prior to that, their traditionally strong alliance had hit a bad patch, due in part to the Saudi role in the war in Yemen and by the killing of Saudi journalist Jamal Khashoggi in Istanbul by Saudi agents in 2018.

The Saudi-led coalition intervened in Yemen in 2015 to fight the Houthis, an Iran-aligned movement that had seized the capital Sanaa and large parts of the country. For much of the conflict – also seen as a proxy war between regional rivals Riyadh and Tehran – the United States provided intelligence, training and technical support on weapons systems to the coalition, along with refuelling war planes carrying out air strikes.

But as the civilian toll from the strikes grew and a humanitarian crisis gripped Yemen, the conflict became a point of tension between Saudi Arabia and the United States under President Joe Biden.

Soon after taking office in 2020, Biden halted support for coalition offensive operations, initiated a review of arms sales to Saudi Arabia and tasked a special envoy to press Riyadh to lift a coalition blockade on Houthi-held areas to secure a truce with the movement. Biden has also refused to deal directly with Crown Prince Mohammed bin Salman as Saudi’s de facto ruler.

Since then, there have been a series of difficult U.S.-Saudi meetings in the Gulf state, including between U.S. National Security adviser Jake Sullivan and Prince Mohammed last September. Another top U.S. adviser Brett McGurk was in Riyadh last week to discuss oil supplies and Yemen.

But faced with new geo-political realities, Washington has approved missiles and an anti-ballistic defence system sales to Saudi Arabia, including 280 air-to-air missiles valued at up to $650 million, the Pentagon said in November.

Two sources familiar with the matter said Washington had sent Patriot missiles and other equipment over the last three months to the kingdom.

A U.S. State Department spokesperson said the United States has been working with Saudi Arabia and its neighbours over the past months to help them strengthen their defences, through foreign military and direct commercial sales and third party transfers which allow neighbouring countries to transfer U.S.-made weapons as needed.

“With U.S. support, Saudi Arabia currently intercepts approximately 90% of these aerial (Houthi) attacks, but we need to aim for 100 percent,” the spokesperson said.

The Saudi government and the Saudi-led coalition have not responded to Reuters’ questions on U.S. arms shipments.

The attacks, which Washington condemned, temporarily cut output at a refinery and caused a fire at a petroleum products distribution terminal. Saudi Arabia called on the international community on Monday to do more to preserve energy supplies and stand firm against the Houthis.

U.S. officials have stressed the defensive nature of military support to Gulf states but experts say it may extend to offensive operations on Houthi weapons systems.

“The defensive/offensive differentiation was always a bit fuzzy and more a game of semantics,” said Peter Salisbury of International Crisis Group.

Amnesty International said U.S.-made precision guided bombs were used in a deadly coalition air strike on a detention centre in Yemen in January that killed scores of people.

NGOs say tens of thousands of Yemenis have been killed, mostly civilians, since the war started including by coalition air strikes. More than 100 were killed in January alone. The coalition says it respects humanitarian international laws when it conducts military operations in Yemen.

Another factor contributing to the changing U.S. stance was worries about Gulf states’ deepening ties with China and Russia as they tried to diversify weapons sources.

“Although on the campaign trail Biden distinguished himself from Trump… that rhetoric has given way to an approach grounded in the U.S. desire to maintain close relations with these governments and not risk ceding ground to China,” said Annelle Sheline, a research fellow at the Quincy Institute.