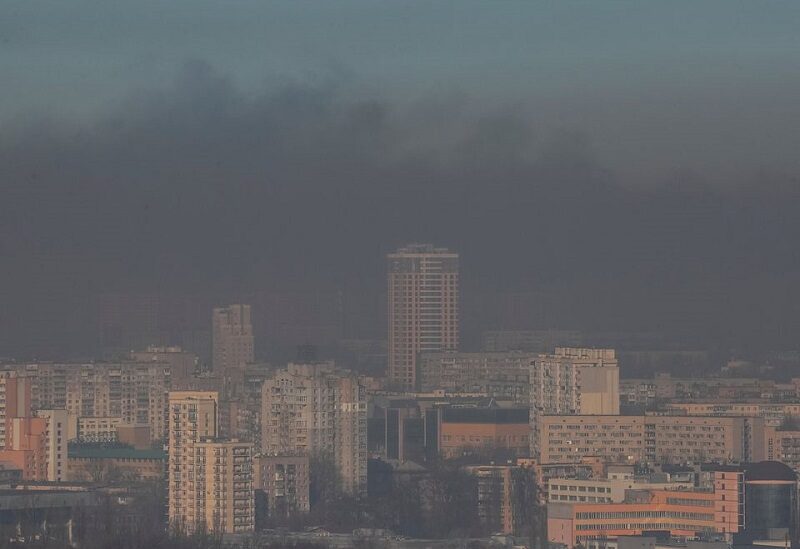 Residential buildings are seen through smoke from fires after shelling on the outskirts of the capital, in Kyiv, Ukraine March 23, 2022. REUTERS/Gleb Garanich

A veteran Kremlin envoy has resigned and left Russia with no intention to return, a source said on Wednesday, the first senior official reported to have quit since Russia launched its invasion of Ukraine a month ago.

Anatoly Chubais was one of the principal architects of Boris Yeltsin’s economic reforms of the 1990s and held senior business and political roles under President Vladimir Putin. He had been Putin’s special envoy to international organisations since 2020.

Chubais hung up the phone when contacted by Reuters. The source did not say why he had quit or where he was.

U.S. President Joe Biden flies to Europe on Wednesday for an emergency NATO summit on Ukraine, where invading Russian troops are stalled, cities are under bombardment and the besieged port of Mariupol is in flames.

Four weeks into a war that has driven a quarter of Ukraine’s 44 million people from their homes, Russia has failed to capture a single major Ukrainian city, while Western sanctions have ostracised it from the world economy.

After failing in what Western countries say was an attempt to seize Kyiv and depose the government, Russian forces have taken heavy losses, been frozen in place for at least a week on most fronts and face supply problems and fierce resistance.

They have turned to siege tactics and bombardment of cities, causing massive destruction and many civilian deaths.

Moscow says its aim is to disarm its neighbour, and its “special military operation” is going to plan. It denies targeting civilians.

Worst hit has been Mariupol, a southern port completely surrounded by Russian forces, where hundreds of thousands of people have been sheltering since the war’s early days, under constant bombardment and with food, water and heat supplies cut.

New satellite photographs from commercial firm Maxar released overnight showed massive destruction of what was once a city of 400,000 people, with columns of smoke rising from residential apartment buildings in flames.

No journalists have been able to report from inside the Ukrainian-held parts of the city for more than a week, during which time Ukrainian officials say Russia has bombed a theatre and an art school used as bomb shelters, burying hundreds of people alive. Russia denies targeting those buildings.

Biden, due to arrive in Brussels on Wednesday evening, will meet NATO and European leaders in an emergency summit at the Western military alliance’s headquarters. The leaders are expected to roll out additional sanctions against Russia on Thursday. Sources said the U.S. package would include measures targeting Russian members of parliament.

Biden will also visit Poland, which has taken in most of the more than 3.6 million refugees who have fled Ukraine and has been the main route for Western supplies of weapons to Ukraine.

In a sign of Moscow’s further isolation, Poland announced it was expelling 45 Russian diplomats accused of either being undercover spies or “associated” with them. Several other eastern European countries have announced similar moves in recent days, although not on such a large scale. Russia has rejected all the accusations.

For Ukrainians, life continues under the relentless bombardment. In Kharkiv in the east, a maternity clinic had moved patients into the basement for safety. Tearful mother Yana cradled her baby in a room with beds lining the walls. Her house has been bombed. “I have nowhere to go,” she said.

Far away in Mykolaiv, a southern port which Russian forces tried and failed to storm over the past 10 days, Tamara Kravchuk, 37, lay blissfully with her baby just minutes old on her chest. She had been scared, especially when explosions burst just 500 metres from the hospital, she said. But baby Katya melted her fears away.

“I think the war will end and we will live as it was before, our life will be calm again,” she said. “I hope our children won’t see all these crazy things and everything will be good.”

Despite its losses so far, Russia may still be hoping to make more gains on the battlefield, especially in the east, in territory including Mariupol which Moscow demands Ukraine cede to Russian-backed separatists.

In a daily intelligence update, Britain’s defence ministry said the entire battlefield across northern Ukraine – which includes huge armoured columns that once bore down on Kyiv – was now “static”, with invaders apparently trying to reorganise.

But in the east, the Russians were trying to link troops at Mariupol with those near Kharkiv in the hope of encircling Ukrainian forces, while in the southwest they were bypassing the city of Mykolayiv to try to advance on Odesa, Ukraine’s biggest port.

Ukrainian officials described sporadic shelling in other cities overnight, with two civilians killed in the Mykolayiv region, a bridge destroyed in the Chernihiv region, and residential buildings and a shopping mall struck in two districts of Kyiv, wounding at least four people.