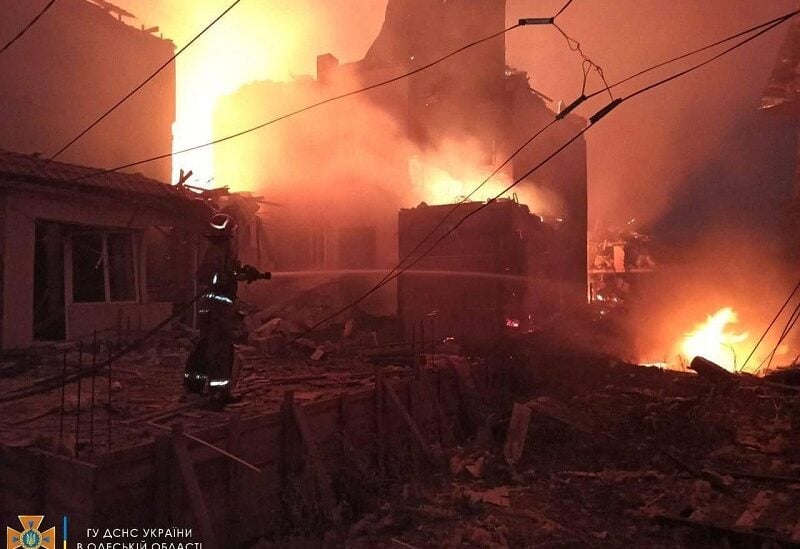 A firefighter works to contain a fire of a building, as Russia's attack on Ukraine continues, at the location given as Zatoka, Odesa region, Ukraine August 17, 2022. Courtesy of State Emergency Service of Ukraine/Handout via REUTERS ATTENTION EDITORS - THIS IMAGE HAS BEEN SUPPLIED BY A THIRD PARTY

Russia’s defence ministry said on Sunday that its hypesonic Kalibr missiles had destroyed an ammunition depot containing missiles for US-made HIMARS rocket system in Ukraine’s southeastern Odesa region, while Kyiv said a granary had been hit.

A spokesman for Odesa’s regional administration said two missiles had been shot down over the sea, but that three had struck agricultural targets.

There were no casualties, the spokesman, Serhiy Bratchuk, said on Telegram. An explosives expert and other investigators were working at the granary, he said.

Russia’s defence ministry also said its forces had destroyed two M777 Howitzers in combat positions in the Kherson region, as well as a fuel depot in the Zaporizhzhia region that it said was storing more than 100 tonnes of diesel fuel.

DW was unable to verify battlefield reports from either side.

Here’s a roundup of some of the other key developments in Ukraine on August 21.

Zelenskyy referenced media reports that indicated Moscow and its proxy forces planned public show trials of Ukrainian fighters who were captured during the siege of Mariupol.

“If this despicable court takes place, if our people are brought into these settings in violation of all agreements, all international rules, there will be abuse,” he said.

On August 24, Ukraine celebrates 31 years of independence from the former Soviet Union.

Ukraine is gearing up for the possibility for Russian state-sponsored mischief and terror. In Kyiv, authorities have banned gatherings from August 22 to August 25.

Mykhaylo Podolyak, a Zelenskyy advisor, noted, “Russia is an archaic state that links its actions to certain dates, it’s an obsession of sorts,” and was therefore likely to intensify its bombing campaign to coincide with the holiday.

UK, US, France, Germany push for nuclear safety in Ukraine
British Prime Minister Boris Johnson and the leaders of the United States, France and Germany on Sunday stressed the importance of ensuring the safety of nuclear sites in Ukraine in a call, Johnson’s office said.

“On a joint call, the Prime Minister, President (Joe) Biden, President (Emmanuel) Macron and Chancellor (Olaf) Scholz underlined their steadfast commitment to supporting Ukraine in the face of Russia’s invasion,” a Downing Street spokesperson said in a statement.

“They stressed the importance of ensuring the safety and security of nuclear installations and welcomed recent discussions on enabling an IAEA mission to the Zaporizhzhia facility.”

Moscow and Kyiv have earlier accused each other of shelling the complex, and the fighting has raised fears of a nuclear catastrophe.

When asked when he was going to Kyiv, Lindner answered: “Now in late summer or autumn. I’m talking to my Ukrainian colleague about it.”

In May, Lindner had already offered his counterpart in Ukraine a visit to Kyiv.

German Foreign Minister Annalena Baerbock (Greens) was the first German government member to visit Kyiv in May since the beginning of the Russian invasion on February 24, and several other ministers have followed since. Chancellor Olaf Scholz (SPD) traveled to Ukraine in June.

Oleksandr Nakonechny was found by his wife with gunshot wounds in a room of their apartment in the city of Kropyvnytsky late Saturday after she heard gunfire, the office wrote on Telegram.

Police have opened an investigation into the death, but made no further comments. Nakonechny has headed the SBU branch in the region since January 2021.

In July, Ukrainian President Volodymyr Zelenskyy fired the head of the SBU, his childhood friend Ivan Bakanov, saying he did not do enough to rid the agency of spies and Russian collaborators.

Zelenskyy said there would be a revision of SBU personnel and several senior officials at the agency have been fired over the past several months.

Czechs send 1,968 crowns to Ukraine in nod to 1968 Soviet invasion
Czech nationals have been sending exactly 1,968 crowns ($80) to Ukraine to help it defend itself against Russia and to commemorate the 1968 invasion of then Czechoslovakia by Soviet-led troops, the Ukrainian embassy said on Sunday.

Russia’s invasion of Ukraine, which has killed thousands, forced millions to flee and caused damage worth billions of dollars, enters its seventh month next week.

The Czechs were using a special payment code to donate 1,968 crowns ($80) to an already existing account set up by Ukraine’s embassy in the Czech Republic to collect funds.

“Even at the weekend, dozens and dozens of payments in the value of 1,968 crowns are arriving to our account, thank you so much, Czech friends!” the embassy said on Twitter.

On August 21, 1968, armies of the Soviet Union and its allies crossed borders into Czechoslovakia, a fellow member of the eastern bloc, to crush a reform movement started earlier that year known as the “Prague Spring”.

The troops killed dozens of civilians and the subsequent occupation pushed tens of thousands into exile. The troops eventually left after the fall of Communist rule in 1989.