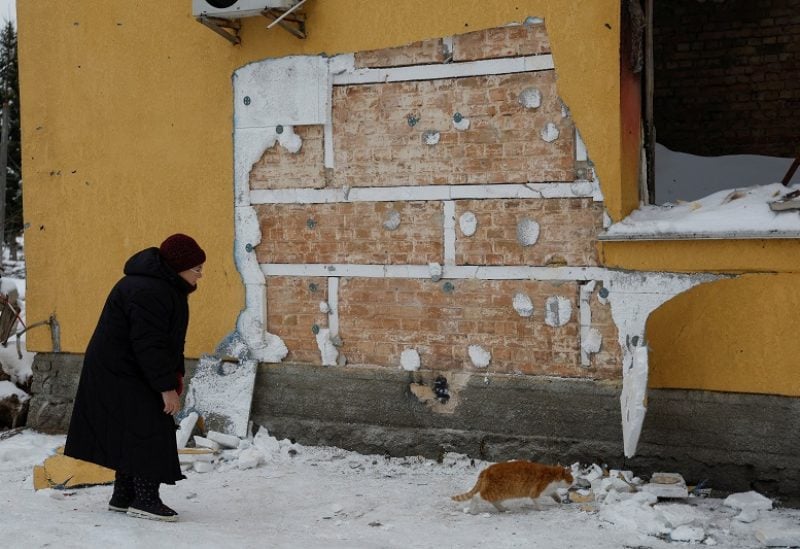 A local woman walks next to a wall of a residential building, heavily damaged during Russian invasion, from which a group of people tried to steal the work of street artist Banksy, in the town of Hostomel, Kyiv region, Ukraine December 3, 2022. REUTERS/Valentyn Ogirenko

Ukrainian Regional military administration Yaroslav Yanushevych said that fresh Russian strikes hit residential areas in Kherson, killing one person and injuring two, hitting a private apartment buildings and other civilian infrastructure came under attack.
Russian forces withdrew from Kherson a few weeks back. However, Ukraine has been checking the area for mines and Ukrainian officials say they have found numerous mines, tripwires and other dangerous objects throughout the Kherson region. The National Police reported that they have seized 4,200 explosive devices and destroyed 1,250 till date.
Kherson had lost power supply after heavy shelling by Russian forces late last week. Now much of electricity supply has been restored, with about 75 per cent now with full access to power as of Sunday morning, according to the regional military administration.
Meanwhile, more than 500 Ukrainian localities were without power Sunday. “The enemy continues to attack the country’s essential infrastructure. Currently, 507 localities in eight regions of our country are cut off from electricity supplies,” deputy interior minister Yevgueny Yenin told Ukrainian television.
“The Kharkiv region is the worst hit with 112 isolated villages,” Yenin added.
Authorities have urged civilians to prepare in the face of deteriorating early winter conditions and regular power outages.
Kyiv’s mayor told residents on Thursday to stock up on water, food and warm clothes. Residents have been told to consider staying with friends in the outskirts of the Ukrainian capital if they could.
Mayor Vitaliy Klitschko warned that the temperature in homes could drop rapidly in the event of “a blackout and the destruction of infrastructure and a total absence of electricity, water supply, drainage and heat supply”.