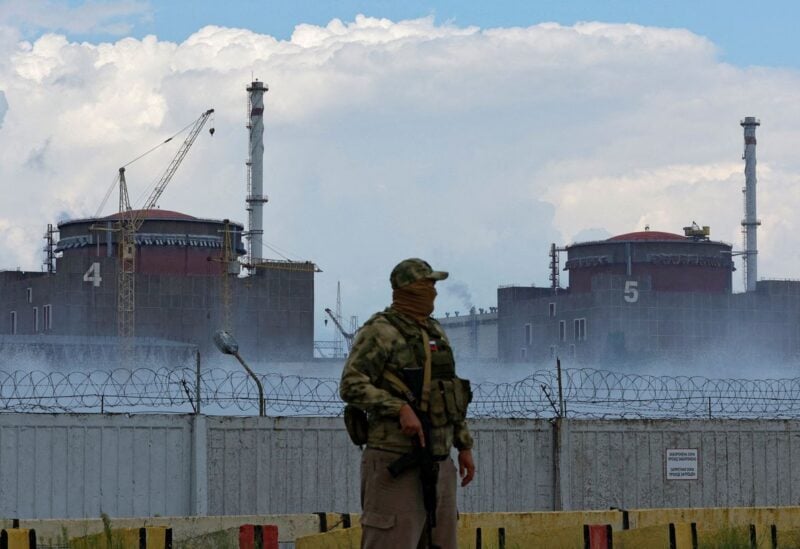 A serviceman with a Russian flag on his uniform stands guard near the Zaporizhzhia Nuclear Power Plant in the course of Ukraine-Russia conflict outside the Russian-controlled city of Enerhodar in the Zaporizhzhia region, Ukraine August 4, 2022. REUTERS/Alexander Ermochenko/File Photo

The Zaporizhzhia nuclear power station is at risk of a man-made nuclear disaster, and Russia warned of this on Thursday. Ukraine is allegedly planning a “provocation” there on Friday with the visit of U.N. Secretary General Antonio Guterres.

The factory, which is close to the war lines, has been shelled numerous times in recent weeks, with Russia and Ukraine each accusing the other for the bombardment.

The Russian defence ministry accused Ukraine of trying to stage a “minor accident” at the plant in southern Ukraine in order to blame Russia.

Reuters could not verify Russia’s assertion.

The Zaporizhzhia nuclear reactor complex, the largest in Europe, was captured by Russian forces soon after tens of thousands of troops entered Ukraine on Feb. 24 in what Russia calls a “special military operation”.

Russian defence ministry spokesman Igor Konashenkov told reporters that Moscow was taking measures to ensure safety at the complex and denied it had deployed heavy weapons in and around the plant.

The ministry said the plant may be shut down if Ukrainian forces continued shelling it.

In a briefing, Igor Kirillov, head of Russia’s radioactive, chemical and biological defence forces, said the plant’s back-up support systems had been damaged as a result of shelling.

Kirillov presented a slide, showing that in the event of an accident at the plant, radioactive material would cover Germany, Poland and Slovakia.

Guterres, who is set to meet Ukrainian President Volodymyr Zelenskiy later on Thursday, has called for a halt to all fighting near the plant.

Yevgeny Balitsky, the head of the Russian-installed administration in the Zaporizhzhia region, said earlier there was a risk that shelling could damage the cooling system of the reactor complex.

Russia says Ukrainian forces are recklessly firing at the plant.

Ukraine says Russia is deliberately using the plant as a base to launch attacks against its forces and Russian troops have struck it themselves to blame Ukraine for any subsequent power cuts.