Russian strikes cause blackouts in much of Ukraine, more flee Kherson 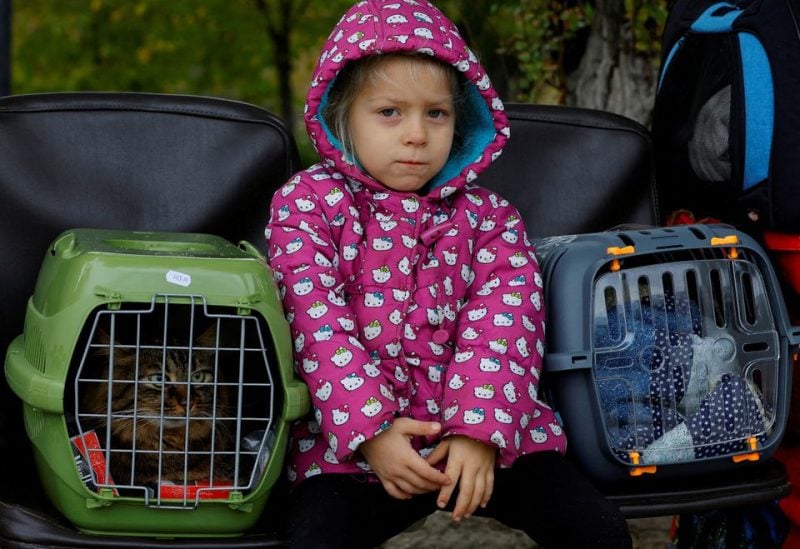 A girl sits between pet carriers as civilians evacuated from the Russian-controlled city of Kherson wait to board a bus heading to Crimea, in the town of Oleshky, Kherson region, Russian-controlled Ukraine October 22, 2022. REUTERS/Alexander Ermochenko

Russian missiles blasted Ukrainian energy and other facilities, creating blackouts in numerous districts, according to Kyiv, while Russian occupation officials in the southern city of Kherson urged inhabitants to flee.

Ukrainian President Volodymyr Zelenskiy stated the Russian strikes were “extremely widespread.” He promised that, with the assistance of its allies, his military would improve on its already impressive record of missile destruction.

With the war about to start its ninth month and winter approaching, the potential for freezing misery loomed as Russia continued to attack Ukraine’s power grid.

In Kherson, a target for Ukraine’s aggressive counterattack to the invasion Russian President Vladimir Putin launched on Feb. 24, the occupation authorities instructed civilians to get out.

“Due to the tense situation at the front, the increased danger of massive shelling of the city and the threat of terrorist attacks, all civilians must immediately leave the city and cross to the (east) bank of the Dnipro!” occupation authorities posted on Telegram.

Thousands of civilians have left Kherson after warnings of a Ukrainian offensive to recapture the city.

At Oleshky on the opposite bank of the Dnipro, Reuters saw people arriving by river boat from Kherson, loaded with boxes, bags and pets. One woman carried a toddler under one arm and a dog under the other.

“I really didn’t want to (leave), I’m still in work,” one resident said. “We wanted to stay here in the region, but now we don’t know.”

Ukraine’s military said it was making gains as its forces moved south through the region, taking over at least two villages it said Russian troops had abandoned. Kherson links Ukraine to the Crimean Peninsula, which was annexed by Russia in 2014.

Reuters could not independently verify the accounts.

Since Oct. 10, Russia has launched devastating salvos at Ukraine’s power infrastructure, hitting at least half its thermal power generation and up to 40% of the entire system.

Officials in a swath of regions on Saturday reported strikes on energy facilities and power outages as engineers scrambled to restore the network. Governors advised residents to stock up on water.

More than a million people were without power, said presidential adviser Kyrylo Tymoshenko. Parts of Kyiv suffered power cuts into the evening, and a city official warned strikes could leave Ukraine’s capital without power and heat for “several days or weeks”.

“Of course we don’t have the technical ability to knock down 100% of the Russian missiles and strike drones. I am sure that, gradually, we will achieve that, with help from our partners. Already now, we are downing a majority of cruise missiles, a majority of drones.”

Ukrainian forces had downed 20 missiles and more than 10 Iranian-made Shahed drones on Saturday, he said. The air force command earlier had said 33 missiles had been fired at Ukraine, with 18 shot down.

No new developments were reported regarding the Nova Kakhovka dam. Zelenskiy on Friday urged the West to warn Moscow not to blow up the Russian-controlled dam on the Dnipro.

Russia has accused Kyiv of rocketing the dam and planning to destroy it in what Ukrainian officials called a sign that Moscow might blow it up and blame Kyiv. Neither side has produced evidence to back up their allegations.

The Soviet-era structure holds back 18 cubic km (4.3 cubic miles) of water, about equal to the Great Salt Lake in the U.S. state of Utah. Its destruction could devastate much of the Kherson region. It supplies water to Crimea and the Russian-held Zaporizhzhia nuclear power plant.

Regarding the Zaporizhzhia plant, considered a potential flashpoint for catastrophe, the Group of Seven industrial powers on Saturday condemned Russia’s kidnapping of the Ukraine-operated plant’s leaders and called for the immediate return of full control of the plant to Ukraine.