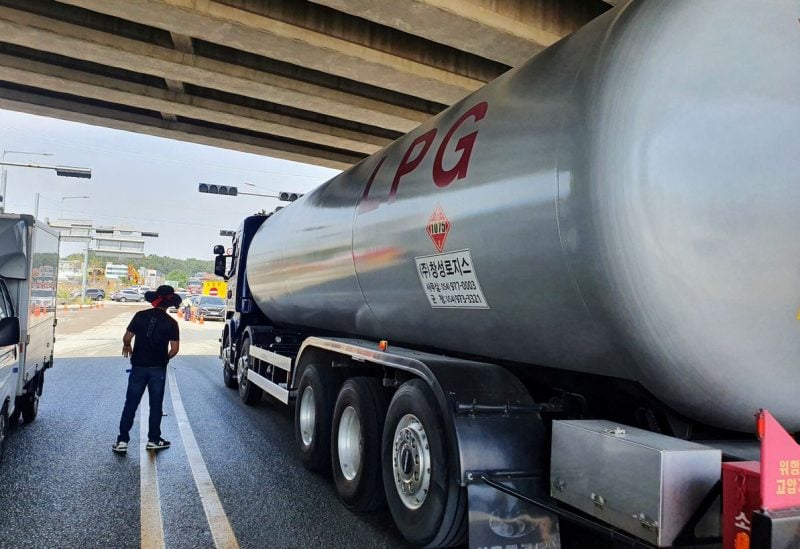 A member of the Cargo Truckers Solidarity union stands next to a LPG lorry in Ulsan, South Korea, June 10, 2022. REUTERS/Byungwook Kim/File Photo

As it gets ready for a planned trucker strike that is raising concerns about the country’s post-pandemic recovery and global supply chains, South Korea announced on Wednesday that it will explore using military trucks for urgent transport.

The 10th-largest economy in the world’s manufacturing and gasoline supply will be affected by the statewide trucker union strike, which is anticipated to begin at midnight (1500 GMT) and be the second in less than six months.

Lead organiser Cargo Truckers Solidarity Union (CTSU), which is pushing for an extension of minimum wage guarantees, has warned of stopping oil supplies at major refineries as well as transport at major ports and industrial plants.

He also threatened to suspend the licences of striking drivers if the walkout was prolonged.

“I am asking the Cargo Truckers Solidarity Union to withdraw the plan to strike now,” Won said in a video posted on the ministry’s YouTube channel, adding that he is open to communications with the union to minimise the damage.

In June, an eight-day strike by truckers delayed cargo shipments for industries from autos to semiconductors in Asia’s fourth-largest economy, costing more than $1.2 billion in lost output and unmet deliveries.

Industry giants including Hyundai Motor and steelmaker POSCO were forced to cut output due to the June strike, and POSCO has warned the fresh action could slow repair works at a major plant hit by floods this summer.

The Korea Oil Station Association is asking gas station owners to secure enough inventory ahead of the strike, an association official said on Wednesday.

“We learned some lessons from the last strike,” said the official, who declined to be named because of the sensitivity of the issue.

CTSU has demanded that the government extend its “Safe Trucking Freight Rate”, a scheme launched during the COVID-19 pandemic to guarantee a minimum annual wage that is due to expire in December.

The government and ruling party offered a three-year extension of the rate policy on Tuesday, but refused to accept the unions’ demand to cover truckers in other industries, including fuel and steel. CTSU rejected that compromise deal.

The transport ministry had said some 7,000 people participated in the June strike, while the union said more than 22,000 took part.

“We had left a minimum breathing room last time but we’re cornered now given the deadline, and will block as many shipments as possible,” Lee Eung-joo, a union official, told Reuters.

He added that almost all of CTSU’s 25,000 members would take part in the upcoming strike, joined by an unspecified number of non-union members.

The Korea International Trade Association, a shippers’ body, said on Wednesday that it has created a task force to handle any disruptions and minimise trade damage.