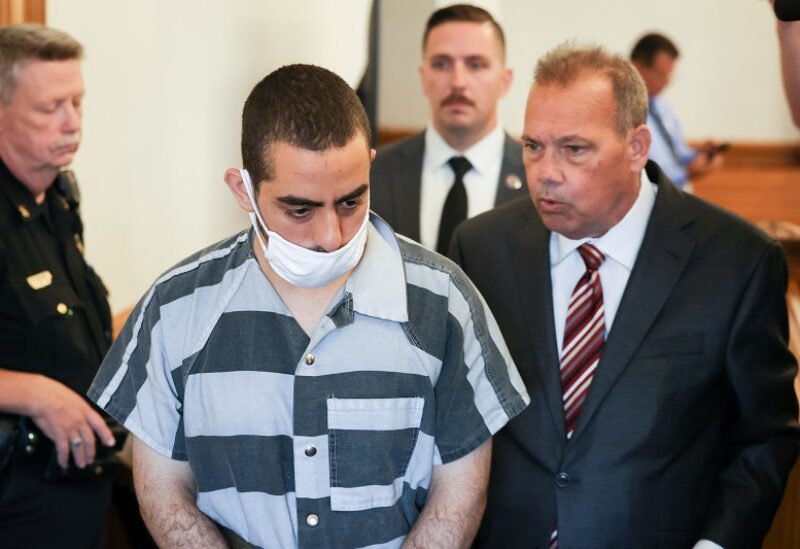 The 24-year-old is accused of stabbing renowned author Salman Rushdie pleaded not guilty to second-degree attempted murder and assault on Thursday.

The writer was rushed to the hospital with severe injuries, and had to be temporarily placed on a ventilator.

In an interview with the New York Post tabloid, the alleged stabber said that he thought Rushdie had “attacked Islam,” though he said he had only read two pages of the award-winning novel “The Satanic Verses.”

He also expressed admiration for Iran’s former Supreme Leader Ayatollah Ruhollah Khomeini, who 33 years ago called on Muslims to assassinate Rushdie over the novel, which partly fictionalizes the life of their religion’s founder Mohammed.
Rushdie went into hiding for a decade due to the decree, but resumed public life shortly after the Iranian government distanced itself from the “fatwa” in 1998.

The author has been the target of previous assassination plots, and translators of “The Satanic Verses” have also been targeted. In 1991, translator Hitoshi Igarashi was stabbed to death in Japan.

The government of Iran has said it had nothing to do with last week’s attack.

The alleged attacker was born in California to a family from Lebanon. Prosecutors say he travelled to Chautauqua Institution, a retreat in western New York, where he bought a pass to Rushdie’s lecture.

If convicted, the attempted murder charge carries a maximum sentence of 25 years.

On Friday, a number of famous authors will read Rushdie passages on the steps of the New York Public Library in solidarity with their colleague, including Paul Auster and Hari Kunzru.