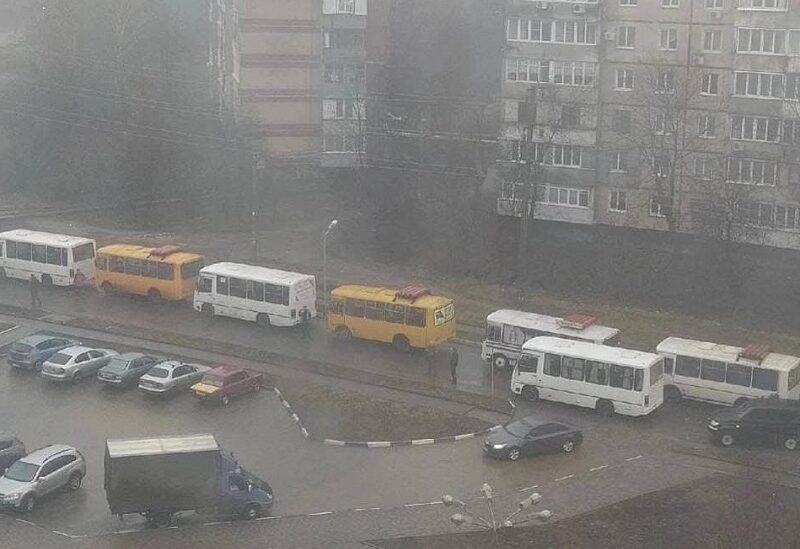 Russian-backed separatist authorities in eastern Ukraine said on Friday that a car had been blown up near their government building in the center of the city of Donetsk, the TASS news agency reported.

Earlier today, Russian-backed separatists announced the sudden surprise evacuation of their breakaway regions in eastern Ukraine on Friday, a shock turn in a conflict the West believes Moscow plans to use to justify an all-out invasion of its neighbor.

Warning sirens blared in Donetsk, the capital of one of the two rebel regions after the announcement.

Regional boss Denis Pushilin announced on social media that Russia had agreed to house those who fled, with women, children and the elderly to be evacuated first. The other self-proclaimed region, Luhansk, made a similar announcement.

Millions of civilians are believed to live in the two rebel-held regions of eastern Ukraine. Most are Russian speakers and many have already been granted Russian citizenship.

The evacuation was set to begin swiftly: Interfax news agency reported the first buses would depart bringing civilians to Russia by 8 p.m. local time, barely four hours after the siren rang out.

Interfax later reported children were already being gathered at an orphanage to be sent to Russia.

The announcement came after the eastern Ukraine conflict zone saw what some sources described as the most intense artillery bombardment for years on Friday, with the Kyiv government and the separatists trading blame.

Western countries have said they think the shelling, which began on Thursday and intensified in its second day, is part of a pretext created by Russia to justify an invasion.

Washington said Russia – which says it started drawing down troops near Ukraine this week – had instead done the opposite: ramping up the force menacing its neighbour to between 169,000 and 190,000 troops, from 100,000 at the end of January.

Western countries fear a conflict on a scale unseen in Europe at least since the Yugoslav and Chechen wars of the 1990s killed hundreds of thousands of people and sent millions to flight. Ukraine is the second biggest country in Europe by area after Russia itself, and home to 40 million people.

“This is the most significant military mobilisation in Europe since the Second World War,” U.S. ambassador Michael Carpenter told a meeting at the Vienna-based Organization for Security and Cooperation in Europe.

Ukraine said Russia was planning staged attacks, including a faked video of an attack on a chemical plant, and falsely accusing it of planning an offensive in the separatist areas.

“Ukrainian forces are not planning any offensive operations, and will not use weapons if this might threaten peaceful civilians,” the Ukrainian military said.

‘THEY ARE SHOOTING – EVERYONE AND EVERYTHING’

Events in the border area over the past 24-48 hours are part of a Russian scenario to create false provocations, allowing Moscow to respond with more aggression towards Ukraine, U.S. Secretary of State Antony Blinken said.

Rather than pull troops back, “on the contrary, we see additional forces going to the border including leading edge forces that would be part of any aggression,” Blinken said at the Munich Security Conference alongside German Foreign Minister Annalena Baerbock.

A diplomatic source with years of direct experience of the conflict described shelling in eastern Ukraine on Friday morning as the most intense since major combat there ended with a 2015 ceasefire.

Close to 600 explosions were recorded on Friday morning, 100 more than on Thursday, some involving 152 mm and 122 mm artillery and large mortars, the source said. At least four rounds had been fired from tanks.

“They are shooting – everyone and everything,” said the source. “There’s been nothing like this since 2014-15.”

Other officials have been more cautious, noting that there have been several periods of deadly fighting during the ceasefire.

Asked about the evacuation orders, Kremlin spokesman Dmitry Peskov said he had no information about the situation and did not know if they were being coordinated with Russia, Interfax also reported.

The announcement piled further pressure on Russia’s rouble currency and other assets. The prospect of war has unnerved investors throughout this week.

The West has threatened tighter economic sanctions on Russia if it invades Ukraine. Moscow, already under sanctions since 2014, has brushed this off. President Vladimir Putin told a news conference in Moscow that Western countries would probably find a reason to impose sanctions whatever Russia does anyway.

Moscow also said it was closely watching the escalation of shelling in eastern Ukraine, where government troops have faced the rebels since 2014. It described the situation as potentially very dangerous.

Russia has forcefully pressed a set of security demands, including a promise to bar Ukraine from ever joining NATO, which the West says is any country’s sovereign right. On Thursday Russia delivered a strongly-worded letter to the United States threatening unspecified “military-technical measures”.

Russia announced Putin would personally supervise exercises of its strategic nuclear missile forces on Saturday, though it said these drills were no cause for alarm.

Among ambiguities surrounding the Kremlin’s intentions are plans for tens of thousands of troops staging exercises in Belarus, north of Ukraine, due to end on Sunday. Moscow has said they would go back to Russia at some point following the drills, but has not said when.

The Russian-backed leader of Belarus, Alexander Lukashenko, met Putin on Friday to discuss the troop presence. Before the meeting Lukashenko suggested the Russians could stay.

“The armed forces will stay as long as needed,” Lukashenko was quoted as saying by the state BelTa news agency.