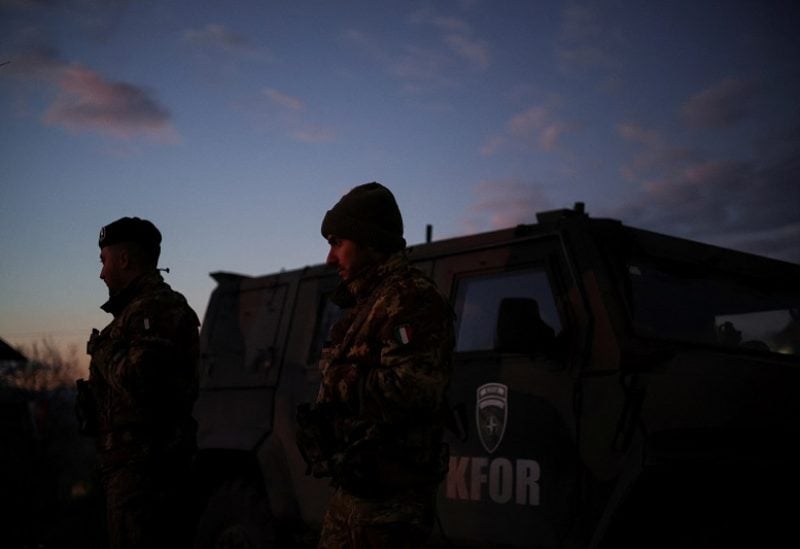 Members of the Italian Armed Forces, part of the NATO peacekeeping mission in Kosovo, stand guard near a roadblock in Rudare, near the northern part of the ethnically-divided town of Mitrovica, Kosovo, December 28, 2022. REUTERS/Florion Goga TPX IMAGES OF THE DAY

“Barricades to come down over days,” Serbia’s President Aleksandar Vucic announced on Wednesday night, adding that Serbs in northern Kosovo will begin removing barricades that they have used to block border crossings in recent weeks.

The announcement came after a late-night crisis meeting between Belgrade and Serb leaders in Kosovo.

“This means that from tomorrow (Thursday), from the morning hours, the removal of barricades will begin,” Vucic said after the meeting.

Protesters have set up more than 10 roadblocks in northern Kosovo, and it could take up to two days to completely dismantle them.

Late on Tuesday, protesters blocked the border crossing of Merdare — one of the main roads connecting Serbia and Kosovo.

“This is not a simple process, and cannot be done in two hours, as some imagined,” Vucic said.

“Within 24 to 48 hours the barricades will be removed,” he added. “But the distrust is not removed.”
Kosovo unilaterally declared independence from Serbia in 2008, but Serbia does not recognize this.

The latest escalation in tensions began in November when Kosovo moved to ban Serbian-issued license plates.

Authorities in Kosovo backed down in response to protests from the country’s Serb community as well as pressure from the European Union.
However, protests continued to escalate when a Serb ex-policeman who had quit over the license plate row was detained after he allegedly assaulted Kosovar police officers.

Serb protesters began barricading roads connecting Serbia and Kosovo. Serbia also ordered its army to be at the highest level of combat readiness on Monday.

“We call on everyone to exercise maximum restraint, to take immediate action to unconditionally de-escalate the situation, and to refrain from provocations, threats, or intimidation,” the European Union and US State Department said in a joint statement on Wednesday.

There are around 120,000 Serbs in Kosovo, which has a total population of 1.8 million people.