Shanghai to reopen all schools Sept. 1 as lockdown fears persist 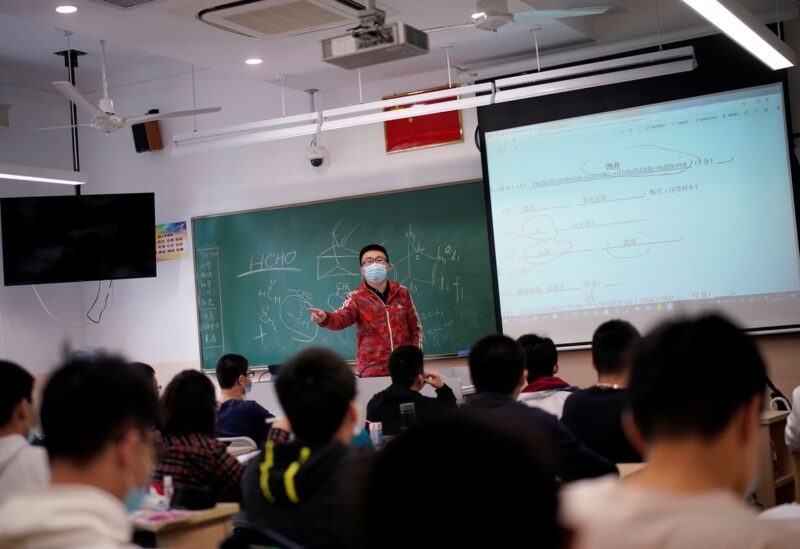 A teacher wearing a face mask teaches inside a classroom during a government-organised media tour at a high school as more students returned to campus following the coronavirus disease (COVID-19) outbreak, in Shanghai, China May 7, 2020. REUTERS/Aly Song

After months of COVID-19 closures, China’s financial hub Shanghai announced on Sunday that all schools, including kindergartens, primary and middle schools, would reopen on September 1.

According to the Shanghai Municipal Education Commission, all teachers and students will be required to take nucleic acid tests for the coronavirus every day before leaving campus.

It also called for teachers and students to carry out a 14-day “self health management” within the city ahead of the school reopening, the commission said in a statement.

Shanghai shut all schools in mid-March before the city’s two-month lockdown to combat its worst COVID outbreak in April and May.

It allowed some students of high school and middle school to return to classrooms in June while most of the rest continued home study for the remainder of the semester.

The announcement on schools reopening brings great relief to many residents but fears about COVID lockdowns continue to persist, as China vows to stick to its dynamic zero policy which requires all positive cases and their close contacts to undergo quarantine.

On Saturday, videos circulating on Chinese social media showed customers pushing past security guards and running out of an IKEA mall in central Shanghai in panic as an announcement blared over its sound system saying the mall was being locked down due to COVID contact tracing.

Reuters was not able to independently verify the authenticity of the videos but IKEA customer service said on Sunday the mall was shut due to COVID curbs. IKEA did not immediately respond to a request for further comment.

Shanghai, the most populous in China, reported five new local infections of COVID, all asymptomatic, for Saturday, while 2,467 domestically transmitted cases were reported nationwide.

It has extended its weekly COVID-19 test requirement and extended free testing until the end of September in a bid to keep the virus in check, authorities announced on Saturday.

Chinese Vice Premier Sun Chunlan urged Hainan to achieve zero cases at the community level as soon as possible when she inspected several places on the island, including the Sanya Phoenix International Airport on Saturday, state media reported.