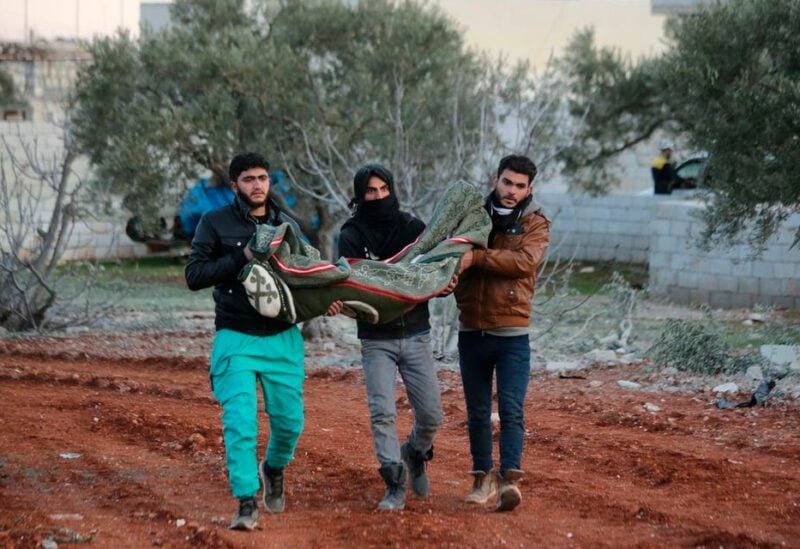 Syrian men carry a child's body after airstrikes destroyed his family house at the northern town of Sarmin, in Idlib province, Syria, on Feb. 2, 2020. (AP)

Syrian government forces shelled a village in the country’s rebel-held northwest on Thursday, killing five people, most of them children, opposition activists said.

Northwestern Syria has been witnessing sporadic military activities since a cease-fire there was reached between Turkey and Russia in March last year, ending a crushing Russian-backed government offensive on Idlib province, the last major rebel stronghold in the war-torn country.

Thursday’s shelling of the village of Belshoun killed one women, three of her children and another child, according to the Britain-based Syrian Observatory for Human Rights, an opposition war monitoring group.

The Syrian civil defense, also known as White Helmets, which is active in opposition-held areas confirmed the deaths and said it took rescuers three hours to recover the bodies from under the rubble.

Syria’s government, which agreed to the Russia-Turkey negotiated truce last year, has vowed to restore control over territory it lost during the 10-year conflict.

Rebel-held northwestern Syria is home to some 4 million people, many of them displaced by the civil war that has killed half a million people, and displaced half the country’s pre-war population of 23 million. They include more than 5 millions who are refugees outside the country.