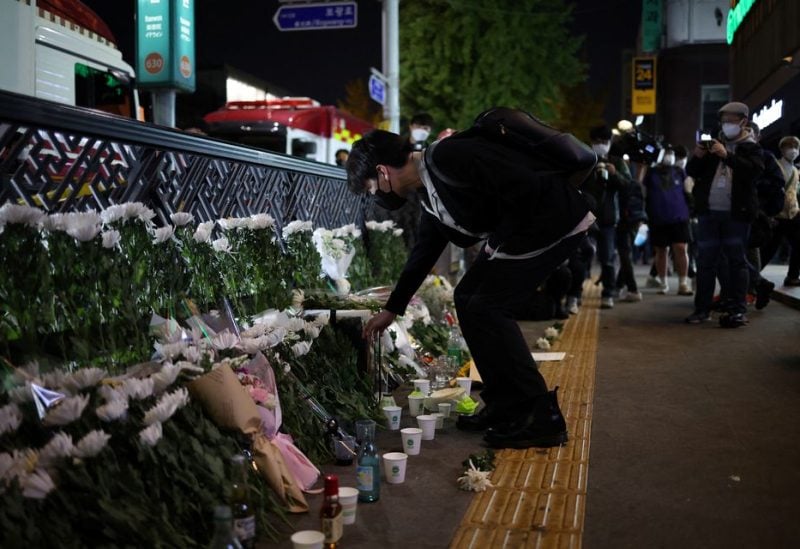 A man pays tribute near the scene of the stampede during Halloween festivities, in Seoul, South Korea, October 30, 2022. REUTERS

On Monday, South Korean police examined video from more than 50 public and private closed-circuit TV cameras as well as from social media in an effort to determine why so many Halloween partygoers were killed when they became stuck in small alleys.

The dead toll increased to 154 as the nation began a week of mourning. 33 of the 149 additional injured patients are in critical condition. There were at least 26 dead people, hailing from 14 different nations.

South Korean President Yoon Suk-yeol called for a thorough investigation, and authorities said they were focused on reconstructing the lead-up to the surge and looking at whether anyone may have been responsible for triggering the crush.

“We are analysing CCTVs to find out the exact cause of the accident,” Police chief investigator Nam Gu-jun told reporters.

“We will continue questioning more witnesses, including nearby shop employees,” he said.

On Saturday, tens of thousands of revelers, many of them in their teens and twenties and dressed in costumes, crammed into the famed Itaewon district for the first essentially unrestrained Halloween celebrations in three years.

Witnesses claimed that chaos broke out when people continued to crowd into a specific sloping, tight lane after it had already been crowded.

The identification of the deceased was almost complete, and funeral arrangements could begin, according to Prime Minister Han Duck-soo, who is in charge of a task force team managing the catastrophe. He also pledged support for the mourning families.