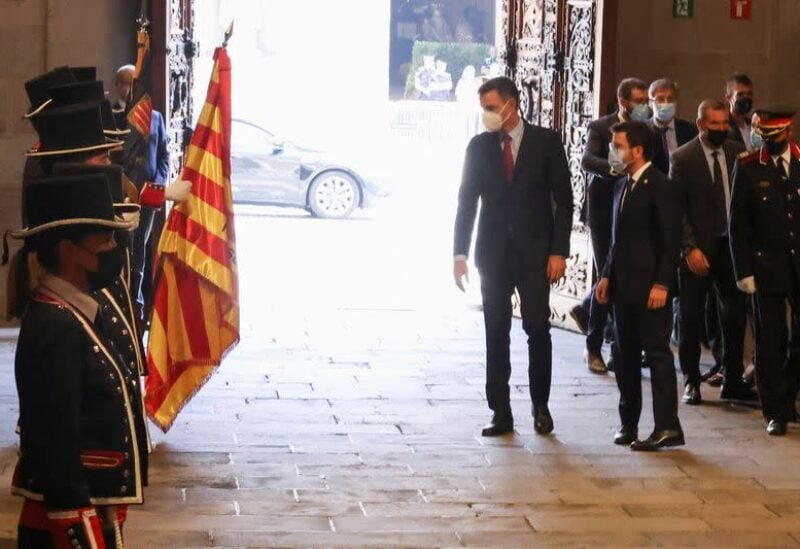 After beginning talks on Wednesday aimed at mending ties damaged by the northeastern region’s failed 2017 secessionist push, Spain’s Prime Minister and Catalonia’s regional leader acknowledged their stances on independence were “quite far apart.”

Prime Minister Pedro Sanchez said his visit to Barcelona and the resumption of talks conveyed a forceful message that his administration wants to repair ties, while he stressed that any deal would require a flexible time period, as he laid out over 40 potential points of agreement.

However, he reiterated that his view on Catalonia’s proposal for an approved independence vote had not changed.

Sanchez is again seeking the support of left-wing separatists Esquerra to pass the 2022 budget in coming weeks, although he said the issue was not discussed.

Esquerra had said resuming the talks – interrupted since the COVID-19 pandemic struck in early 2020 – was an essential precursor to negotiations on the budget. After meeting Sanchez, Aragones said the talks could facilitate the party’s support.

In what he said was a goodwill gesture, Sanchez in June pardoned nine Catalan separatist leaders who were sentenced to lengthy prison terms for their role in the unauthorized 2017 referendum and short-lived declaration of independence, which was Spain’s worst political crisis in decades.

“Our proposal is an amnesty and a referendum,” Aragones said, referring to the roughly 3,000 separatists who pro-independence parties say face open legal investigations while calling the pardons a first step in the right direction.

Signaling divisions in the separatist camp, the junior party in Catalonia’s governing coalition, Junts, did not participate in Wednesday’s talks.