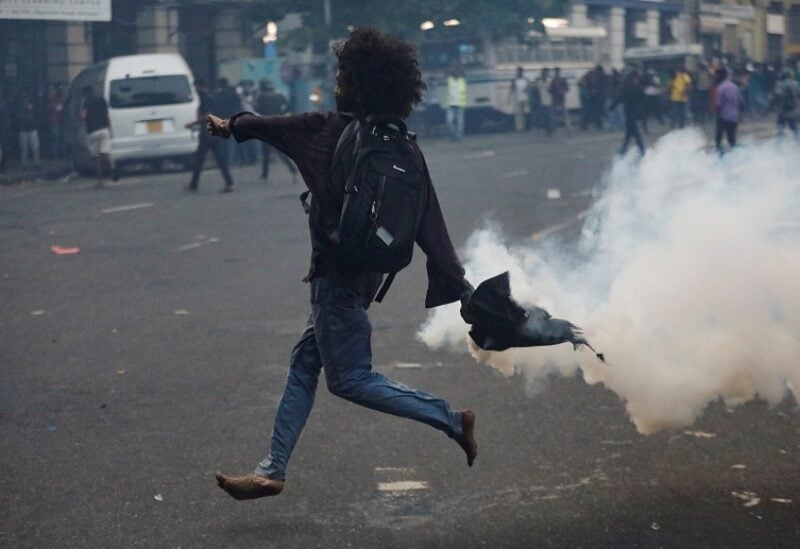 A demonstrator throws back a tear gas towards police members as police use tear gas and water cannons to disperse demonstrators near President's residence during a protest demanding the resignation of President Gotabaya Rajapaksa, amid the country's economic crisis, in Colombo, Sri Lanka, July 8, 2022. REUTERS/Dinuka Liyanawatte

In one of the largest anti-government marches Sri Lanka this year, Thousands of protesters in Colombo broke through police barricades and stormed the president’s official residence on Saturday
Some protesters, holding Sri Lankan flags and helmets, broke into the president’s residence, video footage from local TV news NewsFirst channel showed.
The island of 22 million people is struggling under a severe foreign exchange shortage that has limited essential imports of fuel, food and medicine, plunging it into the worst financial turmoil in seven decades.
Many blame the country’s decline on President Gotabaya Rajapaksa. Largely peaceful protests since March have demanded his resignation.
Thousands of people swarmed into Colombo’s government district, shouting slogans against the president and dismantling several police barricades to reach Rajapaksa’s house, a Reuters witness said.
Police fired shots in the air but were unable to stop the angry crowd from surrounding the presidential residence, the witness said.
Reuters could not immediately confirm the president’s whereabouts.
Despite a severe shortage of fuel that has stalled transportation services, demonstrators packed into buses, trains and trucks from several parts of the country to reach Colombo to protest the government’s failure to protect them from economic ruin.

Sri Lanka’s Prime Minister Ranil Wickremesinghe said last month that the country’s economy has collapsed. The government’s negotiations with the International Monetary Fund have been complex because it has now entered negotiations as a bankrupt state.
Discontent has worsened in recent weeks as the cash-strapped country stopped receiving fuel shipments, forcing school closures and rationing of petrol and diesel for essential services.
Sampath Perera, a 37-year-old fisherman took an overcrowded bus from the seaside town of Negombo 45 km (30 miles) north of Colombo, to join the protest.
“We have told Gota over and over again to go home but he is still clinging onto power. We will not stop until he listens to us,” Perera said.
He is among the millions squeezed by chronic fuel shortages and inflation that hit 54.6 percent in June.
Political instability could undermine Sri Lanka’s talks with the International Monetary Fund seeking a $3 billion bailout, a restructuring of some foreign debt and fund-raising from multilateral and bilateral sources to ease the dollar drought.
Police imposed a curfew in Colombo and several other main urban areas on Friday night but withdrew it Saturday morning amid objections by lawyers and opposition politicians who called it illegal.
Riot police and army personnel are deployed in the city, and the area surrounding the president’s official residence is heavily barricaded.
US Ambassador to Sri Lanka Julie Chung on Friday asked people to protest peacefully and called for the military and police “to grant peaceful protesters the space and security to do so.”
“Chaos & force will not fix the economy or bring the political stability that Sri Lankans need right now,” Chung said in a tweet.
Months of protests have nearly dismantled the Rajapaksa political dynasty that has ruled Sri Lanka for most of the past two decades. One of Rajapaksa’s brothers resigned as prime minister last month, and two other brothers and a nephew quit their Cabinet posts earlier.
President Rajapaksa has held on to power.
Wickremesinghe took over as prime minister in May and protests temporarily waned in the hope he could find cash for the country’s urgent needs but people now want him to resign saying he has failed to fulfill his promises.