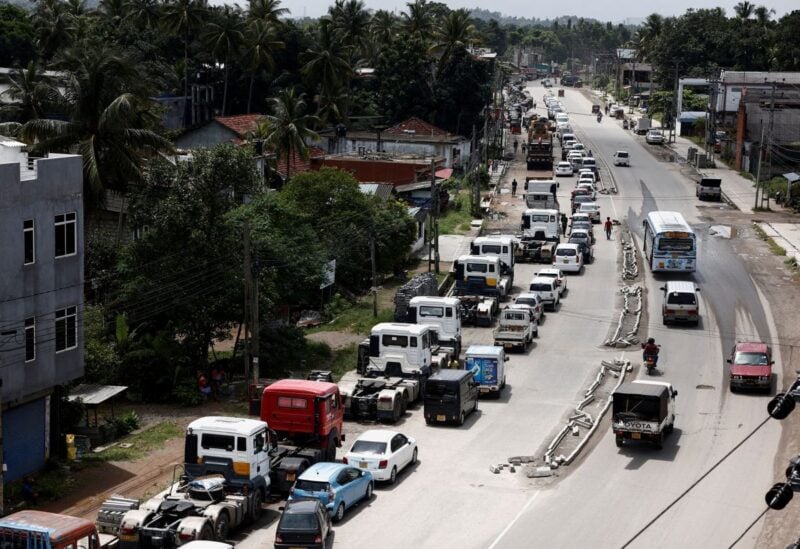 Vehicles queue for diesel and petrol as they wait for a bowser since yesterday, amid the country's economic crisis, in Colombo, Sri Lanka, June 23, 2022. REUTERS/Dinuka Liyanawatte/File Photo

A 22 million-person crisis-hit nation of Sri Lanka is down to barely 15,000 tons of petrol and gasoline to keep vital services operating in the coming days, a top government minister said on Sunday. Fresh fuel supplies are difficult to get, he added.

As a result of record-low foreign exchange reserves and the island’s greatest financial crisis in seven decades, it is rushing to pay for imports of basic necessities including food, fuel, and medication.

“We are struggling to find suppliers. They are reluctant to accept letters of credit from our banks. There are over $700 million in overdue payments so now suppliers want advance payments,” Power and Energy Minister Kanchana Wijesekera told reporters.

In the past two months Sri Lanka largely recieved fuel via a $500 million Indian credit line, which ran out in mid-June. A petrol shipment due last Thursday failed to arrive and no fresh shipments are yet scheduled, Wijesekera said.

However, Sri Lanka also implemented a 12%-22% fuel price increase in the early hours of Sunday. A price hike in May pushed inflation to 45.3%, the highest since 2015.

People, already waiting in kilometers long, snaking queues outside pumps, are unlikely to get fuel as the government will focus on issuing the remaining stocks for public transport, power generation and medical services, Wijesekera said.

The military, which has already been deployed at fuel stations to quell unrest, will now issue tokens to those waiting, sometimes for days, he said, adding that ports and airports will be given fuel rations.

Separately, the government on Sunday asked about one million public employees to work from home until further notice.

A top delegation from the U.S. Treasury and State Departments arrived in Colombo for a three-day visit on Sunday to assess the situation. An team from the International Monetary Fund is already in Sri Lanka for talks on a possible $3 billion bailout package.