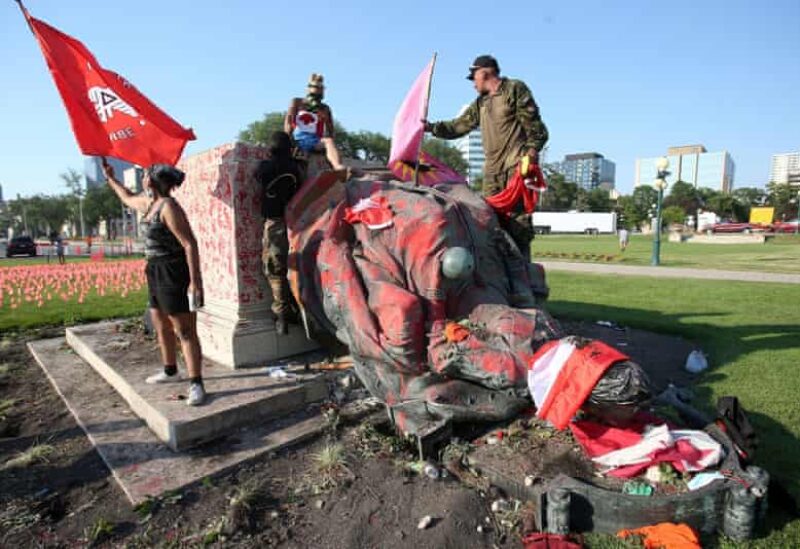 Protesters in Winnipeg, Canada, have toppled sculptures of Queen Victoria and Queen Elizabeth II as outrage builds over the discovery of hundreds of children’s bones in unmarked graves at former indigenous schools.

Before tearing down the monarchs’ sculptures, a throng screamed “no glory in genocide.”

The incident occurred on Canada Day, which is generally marked by celebrations around the country.

However, many communities cancelled festivities this year as a result of the indigenous children controversy, which forced Canadians to confront their colonial past. The day will be “a time for reflection,” according to Prime Minister Justin Trudeau.

Almost 1,000 unmarked graves have been found at former residential schools in British Columbia and Saskatchewan that were mainly run by the Catholic Church and funded by the government.

For 165 years and as recently as 1996, the schools forcibly separated indigenous children from their families, subjecting them to malnourishment and physical and sexual abuse in what the Truth and Reconciliation Commission called “cultural genocide” in 2015.

In Winnipeg, a crowd cheered as Queen Victoria’s statue fell outside the Manitoba provincial legislature. Protesters, many of whom wore orange clothing, also kicked the toppled statue and danced around it. The pedestal and statue were daubed in red paint hand marks.

A nearby statue of Queen Elizabeth was also pulled down. She is Canada’s current head of state, while Victoria reigned from 1837 to 1901 when Canada was part of the British Empire.

On Thursday, protests in support of indigenous children took place in Toronto, Canada’s financial capital, while a #CancelCanadaDay march in Ottawa, Canada’s capital, gathered hundreds in support of victims and survivors of the residential school system.

In other regions of the country, vigils and rallies were conducted. Many people wore orange clothes, which has become the movement’s symbol.

The discovery of the children’s bones in the defunct schools “has justifiably prompted us to reflect on our country’s historical failures,” Trudeau said in his Canada Day statement. In Canada, he argued, inequity still exists for indigenous peoples and many others.