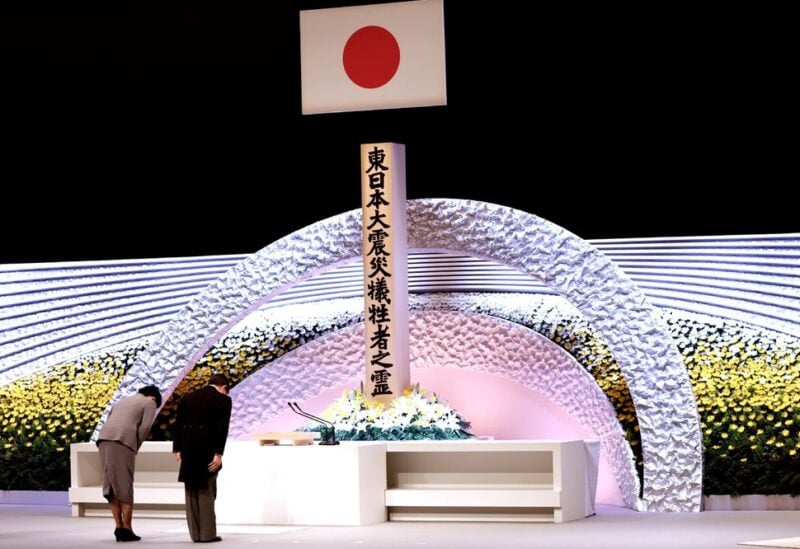 TOKYO: Japan on Thursday marked the 10th anniversary of the earthquake, tsunami and nuclear disaster that hit its northeastern region, where many survivors’ lives are still on hold.

Carrying bouquets, many walked to the coast or visited graves to pray for relatives and friends washed away by the tsunami. Emperor Naruhito and Prime Minister Yoshihide Suga were among those observing a moment of silence at 2:46 p.m. — the minute the shaking started — at a memorial in Tokyo.

The magnitude 9.0 quake that struck on March 11, 2011, was one of the biggest on record and set off a massive tsunami that swept far inland, destroying towns and causing meltdowns at the Fukushima Daiichi nuclear plant. More than 18,000 people died, mostly in the tsunami, and nearly half a million people were displaced.

Additionally, the government recognized about 3,700 others — majority of them from Fukushima — who died of causes linked to the disaster.

Ten years later, more than 40,000 people are still unable to return home in and around Fukushima, where areas near the wrecked plant are still off-limits due to radioactive contamination.

“Reconstruction in disaster-hit areas has moved forward significantly, but recovery of the survivors’ hearts is not making as much progress as we wish,” said Makoto Saito, a teacher at an elementary school in Minamisoma, a town hit by the triple disaster where he lost his 5-year-old son Shota in the tsunami.

Saito, representing Fukushima survivors, said in his speech at the ceremony that he is afraid memories are fading outside the disaster zone and he is committed to keep telling the lessons from the disaster and stories of his son.

Naruhito said “my heart aches” when he thinks of those who have struggled with hardships, drastic changes to their lives, lost their loved ones, jobs and communities. He especially noted the suffering of many Fukushima residents who cannot go back.

“I also consider it important to heal emotional scars and watch over the mental and physical health of those afflicted, including the elderly and children,” he said. He stressed that it’s important for people to stand by them and help reconstruct their lives “without leaving even a single soul behind in this difficult situation.”

Rebuilding roads, train lines, and other key infrastructure and housing has mostly been completed at the cost of more than 30 trillion yen ($280 billion), but a lot of empty land remains empty in coastal towns farther north in Miyagi and Iwate prefectures, where existing population losses were accelerated by the disaster.

In Otsuchi town in Iwate prefecture, where the tsunami destroyed the town hall, killing about 40 employees, families in dark suits gathered on a piece of empty land where the building used to stand. In Ishinomaki, Miyagi prefecture, dozens of residents prayed at a cenotaph carrying the names of more than 3,000 victims.

No deaths have been confirmed directly from the radiation, but Fukushima has fallen behind in the recovery efforts, with 2.4% of land classified as no-go zones near the nuclear plant. The decommissioning of the melted reactors is an unprecedented challenge, with some questioning after 10 years of work whether it can be done at all.

Thursday’s ceremony is the last national commemoration for the 2011 disaster organized by the government. It comes just two weeks before the Olympic torch run begins from Fukushima for the delayed Tokyo Summer Games in July.

Suga has said the Olympics will showcase Japan’s recovery from the disaster and will be proof of human victory over the coronavirus pandemic. Some disaster survivors, however, say their job is still only half done.

“We are now at a stage to wrap up the disaster reconstruction,” Suga said at the memorial ceremony. He acknowledged that some people are still in difficulty with the pandemic adding to their hardships, and pledged to provide support catering to individual needs in rebuilding their environment, livelihoods and businesses.