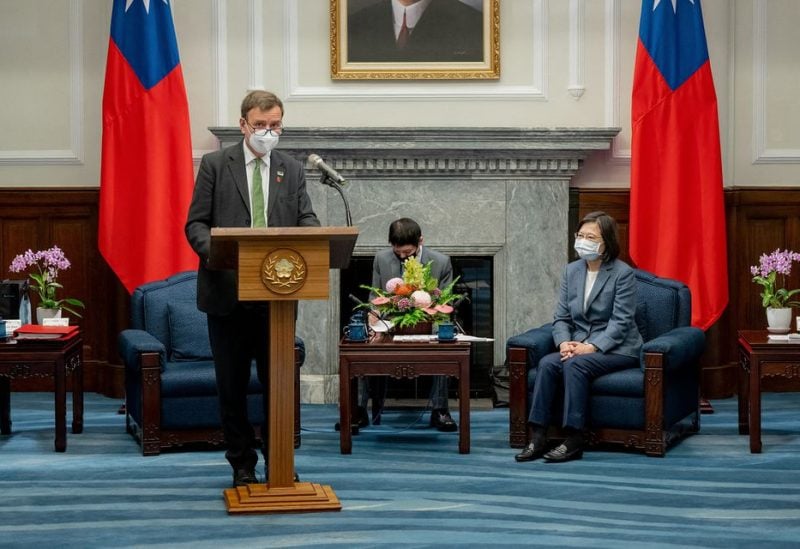 British Minister of State at the Department for International Trade Greg Hands speaks during a meeting with Taiwan President Tsai Ing-wen at the presidential building in Taipei, Taiwan, November 9, 2022. Taiwan Presidential Office/Handout via REUTERS

Taiwan regards Britain as an important democratic partner, and has been encouraged by its concern about recent Chinese military exercises near the island, as well as its support for Taiwan’s participation in international organizations, the majority of which Taiwan is barred from joining due to China’s opposition.

China claims democratically governed Taiwan as its own territory and strongly objects to any official interactions between the island and foreign governments, believing it to be support for Taiwan’s desire to be recognised as its own country.

Meeting Minister of State for Trade Greg Hands at the presidential office in Taipei, Tsai thanked Britain for its long-term support of Taiwan’s international participation and peace and stability in the Taiwan Strait.

“We attach great importance to the British proposal to promote an enhanced trade partnership between Taiwan and Britain,” Tsai said.

Taiwan, a major computer chip producer, was willing to “make the best allocations” to help the world on restructuring the semiconductor supply chain, and looked forward to working with democratic allies like Britain to build a more resilient global supply network, she said.

“I hope that with the support of the new government, Taiwan-Britain relations will continue to improve and there will be more results from our cooperation.”

Britain’s Department for International Trade said it was “delighted to be on track” for entry to the CPTPP, but, as it had yet to join, it could not comment on other potential joiners.

Britain has no formal diplomatic ties with Taiwan but the two have close economic and informal relations and Britain maintains a de facto embassy in Taipei.

Hands, in Taiwan for trade talks, told Tsai that their relationship was not only about that.

“Our relationship reaches beyond trade and investment – as two groups of islands with strong democracies and institutions, we have much in common, and face many challenges as likeminded partners,” Hands’ office quoted him as saying.

China’s foreign ministry this week expressed anger at the trip, saying Britain should stop any official exchanges with Taiwan.