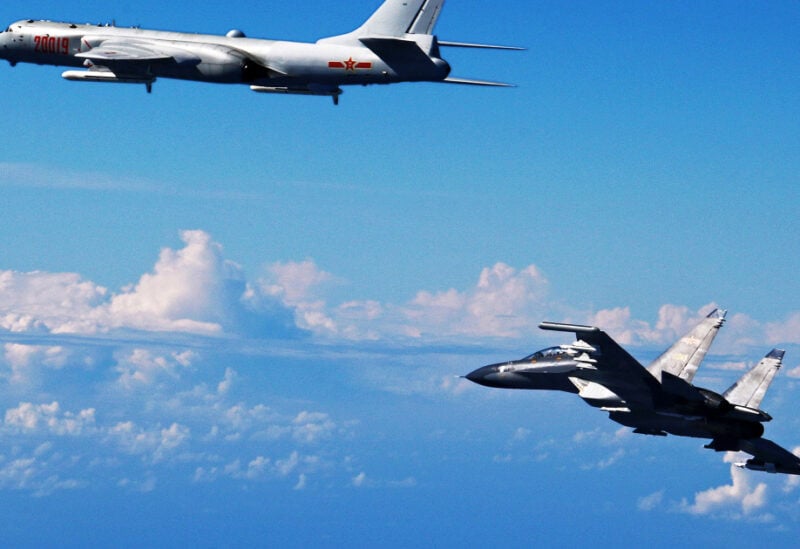 In this Sunday, Sept. 25, 2016, photo released by Xinhua News Agency, Chinese People's Liberation Army Air Force Su-30 fighter, right, flies along with a H-6K bomber as they take part in a drill near the East China Sea. Japan's top government spokesman has warned China against expanding its military activity in the skies over disputed East China Sea islands after eight Chinese warplanes flew near the area on Sunday. (Shao Jing/Xinhua via AP)

Two Taiwanese jets collided Monday where a Taiwanese air force pilot has been killed and another is missing after their fighter jets disappeared off the island’s southern coast, officials said.

The crash on Monday was the third such incident in the past half-year, at a time when the island’s armed forces are having to intercept Chinese aircraft on an almost daily basis.

The two F-5E jets disappeared from radar at about 3pm (07:00 GMT) some 2.6km (1.6 miles) off the coast of rural southern Pingtung County, the National Rescue Command Centre said.

It added that the fighters, each with one pilot on board, crashed into the sea off the island’s southeastern coast after they apparently collided in midair during a training mission.

One of the pilots was found unconscious in the sea but could not be resuscitated and was pronounced dead at the hospital.

Rescuers were still searching for the remaining pilot.

In January last year, Taiwan’s top military official was among eight people killed when a helicopter carrying them to visit soldiers crashed in a mountainous area near the capital Taipei.

While Taiwan’s air force is well trained and equipped, mostly with US-made equipment, it is dwarfed by China’s.

Beijing views the democratic island as its own territory and has never renounced the use of force to bring it under Chinese control.

Under President Xi Jinping, China has become markedly more hostile towards Taiwan and last year Chinese jets made a record 380 incursions into its defence zone, with some analysts warning that tensions between the two sides are at their highest since the mid-1990s.

The incursions force outgunned Taiwan to regularly scramble their own jets and keep pilots on a round-the-clock war footing that takes its toll on ageing aircraft and those flying them.

The US-built F-5E is an older generation fighter with a design that dates back to the 1960s.

It first entered service in Taiwan in the late 1970s and has been mostly been retired from front-line activities, though some are still used for training and as back-up for the main fleet.