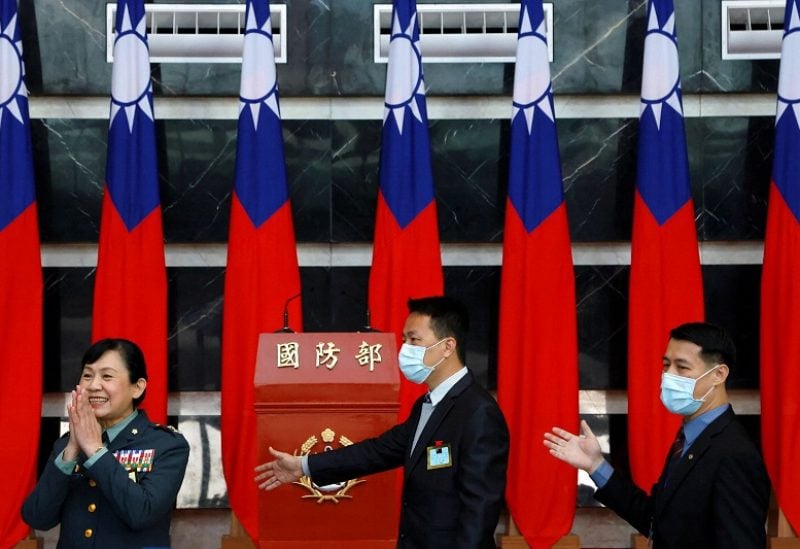 A senior Taiwanese government official said that Taiwan will announce on Tuesday a plan to extend compulsory military service to one year from the current four months, as the island deals with rising Chinese military pressure.
The office of Taiwan President Tsai Ing-wen said she will call a national security meeting on Tuesday morning to discuss reinforcing the island’s civil defense, followed by a news conference on unspecified new civil defense measures.
Tsai’s security team, including high-level officials from the defense ministry and the National Security Council, has been reviewing Taiwan’s military system since 2020 amid fast-rising Chinese threats, according to the official, who declined to be named because the information was private.
“China’s various unilateral behaviors have become a major concern for regional security,” said the person, who took part in the high-level security discussion.
The military reform would also include boosting training for conscripts, such as introducing combat instruction used by US forces and strengthening shooting exercises, the official said, adding that the new system is scheduled to go into effect in 2024.
Taiwan’s defense ministry declined to comment.
The official Central News Agency, citing government and ruling party sources familiar with the matter, first reported late on Monday that her government would on Tuesday announce the plan to extend compulsory military service.
Taiwan has been gradually shifting from a conscript military to a volunteer-dominated professional force, but China’s growing assertiveness toward the island it claims as its own, as well as Russia’s invasion of Ukraine, have prompted debate about how to boost defense. Russia calls the war a “special operation.”
Taipei, which rejects Beijing’s sovereignty claims, on Monday reported the larges-ever Chinese air force incursion into the island’s air defense identification zone, with 43 Chinese planes crossing an unofficial buffer between the two sides.
China also staged war games near Taiwan in August following a visit to Taipei by then-US House Speaker Nancy Pelosi.
Previous governments under the ruling Democratic Progressive Party and the main opposition Kuomintang cut compulsory service for men from more than two years to four months to please younger voters as tensions eased between Taipei and Beijing.
Tsai is overseeing a broad modernization program, championing the idea of “asymmetric warfare” to make the island’s forces more mobile, agile and harder to attack.
China has stepped up its diplomatic, military and economic pressure in recent years on the self-governed island to accept Beijing’s rule. Taiwan’s government says only Taiwanese people can decide their future and vows to defend itself if attacked.