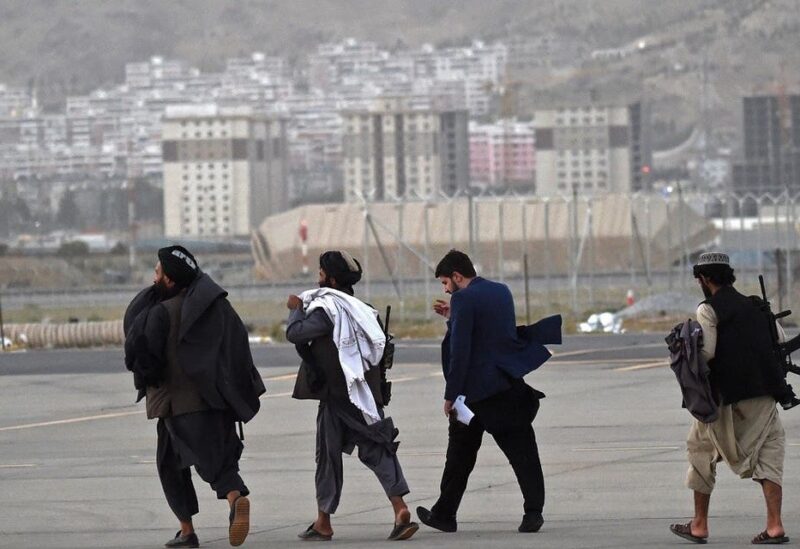 Taliban fighters walk through the tarmac after a Qatar Airways aircraft took off from the airport in Kabul on Sept. 9, 2021. (AFP)

The interim Taliban administration announced on Wednesday the establishment of a military tribunal to enforce Islamic law in Afghanistan.
The tribunal has been formed on the command of supreme leader Hebatullah Akhundzada to enforce “sharia system, divine decrees, and social reform,” Enamullah Samangani, the group’s deputy spokesman, said in a statement.
Obaidullah Nezami has been appointed as the tribunal’s chairman, with Seyed Aghaz and Zahed Akhundzadeh serving as deputies, the statement added.
According to Samangani, the military tribunal will have the authority to interpret Shariah rulings, issue decrees relevant to Islamic civil laws and jurisprudence in high-level cases, and also register complaints, lawsuits, and petitions against Taliban officials and members of the police, army, and intelligence units.
Following the collapse of the Western-backed government and the Taliban’s return to power in August, the legal system remains paralyzed, and Taliban fighters are said to enforce law and order.
Meanwhile, the High Directorate of Intelligence, the Taliban intelligence department, said crime rates have dropped, with 82 kidnappers and dozens of thieves apprehended since they took power in August.
Earlier, Hassan Akhund, the acting prime minister, directed officials to investigate the case of “arrest and torture” of Allah Gul Mujahid, a former member of the Wolesi Jirga (lower house).
This was followed by viral videos of Mujahid being beaten and insulted by the Taliban forces posted on social media.