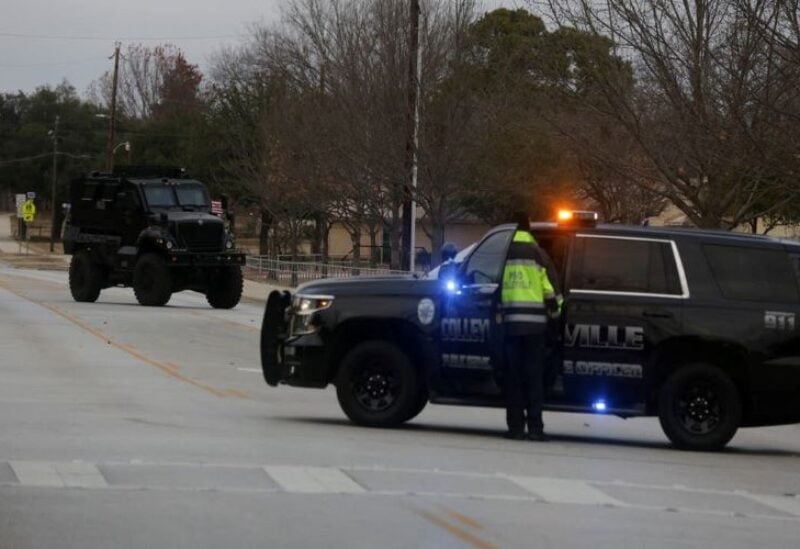 Law enforcement vehicles are seen in the area where a man has reportedly taken people hostage at a synagogue during services that were being streamed live, in Colleyville

All remaining hostages inside a synagogue in Colleyville, Texas, were safely freed on Saturday night, more than 10 hours after a shooter interrupted a religious service and began a tense stand-off with police.

FBI Hostage Rescue Team members stormed the synagogue to release the three remaining captives. Colleyville Police Chief Michael Miller said at a press conference that the gunman had been killed.

According to authorities, the shooter first held four individuals hostage at the Congregation Beth Israel, including the rabbi. Six hours later, one captive was freed unhurt.

“Prayers were answered. “All hostages are out alive and well,” Abbott tweeted. The FBI claimed it had established the gunman’s identity but would not reveal it just yet. The FBI refused to identify the reason of his death, stating that it was still being investigated.

The Colleyville Police Department said SWAT teams initially arrived to the synagogue in response to emergency calls about 10:41 a.m. during the Shabbat service, which was being streamed online. FBI negotiators quickly made contact with the individual, who stated that he wanted to talk with a woman.

There were no reported injuries among the hostages.

During a Facebook video of the Reform Jewish synagogue’s service in Colleyville, about 16 miles (26 kilometers) northeast of Fort Worth, the guy could be heard having a one-sided discussion in what looked to be a phone call. Around 3 p.m. EST, the webcast was switched off (2000 GMT).

The guy could be heard yelling and raving about religion and his sister before the broadcast terminated, according to the Fort Worth Star-Telegram. According to the publication, the man could be heard repeatedly screaming that he didn’t want to see anyone injured and that he thought he was going to die.

Barry Klompus, who has been a member of the group since its inception in 1999, said he watched the broadcast.

“It was dreadful hearing and seeing,” Klompus remarked over the phone.

According to a U.S. official briefed on the situation, the hostage-taker claimed to be the brother of Pakistani neuroscientist Aafia Siddiqui, who is serving an 86-year U.S. prison term for shooting at soldiers and FBI agents in 2010, and that he is seeking her release.

Siddiqui is being imprisoned in a federal prison near Fort Worth. Marwa Elbially, a lawyer for Siddiqui, told CNN in a statement that the guy was not Siddiqui’s brother. He pleaded with the guy to free the captives, claiming Siddiqui’s family was outraged by his “heinous” conduct.

The Council on American-Islamic Relations (CAIR), a Muslim advocacy organization in the United States, denounced the man’s behavior.

“This latest antisemitic attack on Jewish Americans worshiping in a synagogue is sheer evil,” CAIR stated in a statement.

Klompus stated that he was unaware of any substantial prior threats to the group.

“We don’t have a security person on duty, but we have a very strong connection with the local police,” he explained.