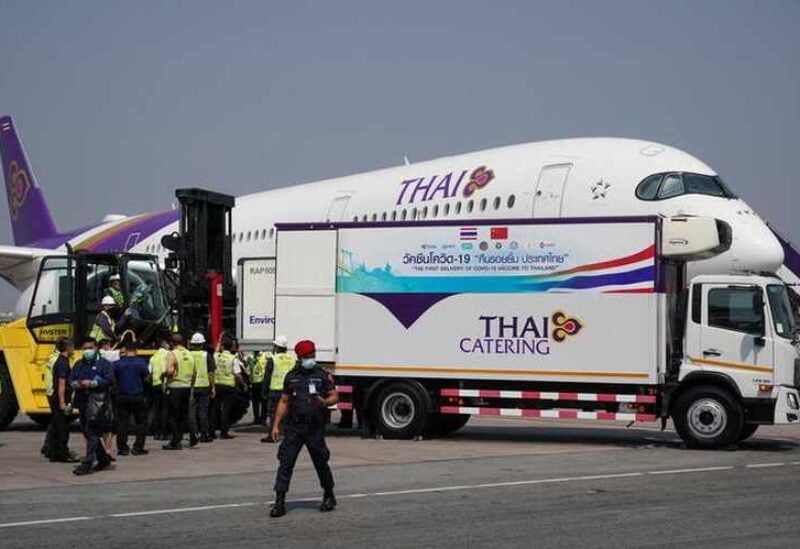 A container with Sinovac coronavirus disease (COVID-19) vaccines is loaded into a truck after a shipment of 200,000 doses from China arrived at Bangkok's Suvarnabhumi International Airport, in Bangkok, Thailand February 24, 2021. REUTERS/Athit Perawongmetha

Thailand has started its COVID-19 inoculation campaign on Sunday, with health officials, medical professionals and cabinet ministers among the first in the queue to receive vaccine shots.

The first shots of vaccine, developed by China’s Sinovac Biotech, were administered to Deputy Prime Minister Anutin Charnvirakul, who is also the health minister, among others at an infectious diseases institute on the outskirts of Bangkok.

“I hope that the vaccination will result in people being safe from the spread of coronavirus and it allows Thailand to return to normalcy as soon as possible,” Anutin told reporters soon after.

Thai Prime Minister Prayuth Chan-ocha, 66, attended the event, although his age falls outside the range of 18 to 59 suitable to receive SinoVac’s CoronaVac vaccine, so he did not get it.

The country received its first 200,000 shots of the Sinovac vaccine from China and 117,00 imported doses of AstraZeneca’s vaccine this week.

The health ministry announced that CoronaVac has been distributed to 13 high-risk provinces, which will start injecting frontline health professionals and volunteers on Sunday.

AstraZeneca’s vaccine will be ready for use by the second week of March, after going through quality control tests, the company said in a statement.

Thailand is set to take delivery of a further 1.8 million doses of CoronaVac in March and April.

A mass campaign to administer 10 million doses a month is expected to start in June, with 61 million shots of AstraZeneca vaccines produced by local firm Siam Bioscience.

With a tally of just over 25,000 infections, Thailand has escaped the kind of fallout suffered by some other countries since the global pandemic began last year.