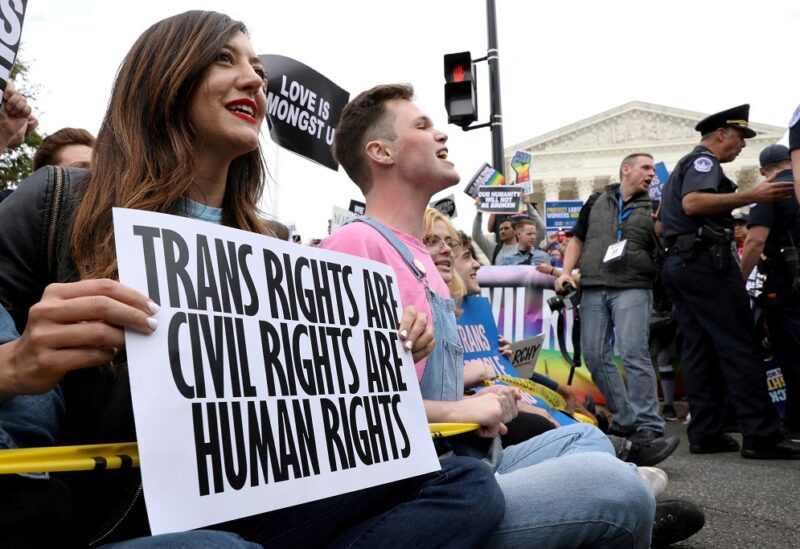 LGBTQ activists and supporters block the street outside the U.S. Supreme Court as it hears arguments in a major LGBT rights case on whether a federal anti-discrimination law that prohibits workplace discrimination on the basis of sex covers gay and transgender employees in Washington, U.S. October 8, 2019. REUTERS/Jonathan Ernst/File Photo

Thousands of Romanians marched in support of LGBTQ rights in Bucharest on Saturday in anticipation of proposed laws that would jeopardize upcoming parades and encourage discrimination.

A law previously approved by the Senate that forbids what is known as LGBT promotion in schools, emulating policies in Hungary and Russia, is scheduled to be brought up for discussion in the lower house of parliament.

LGBTQ rights groups have warned the bill discriminates against the minority and could lead to the censorship of movies and news about the LGBT community, as well as restrictions on marches and public events.

An estimated 10,000 people joined the march on Saturday, dancing and waving rainbow flags.

Socially conservative Romania decriminalised homosexuality in 2001, decades later than other parts of the European Union, but bars marriage and civil partnerships for same sex couples.

A blanket ban on gender identity studies in 2020 was ultimately struck down.