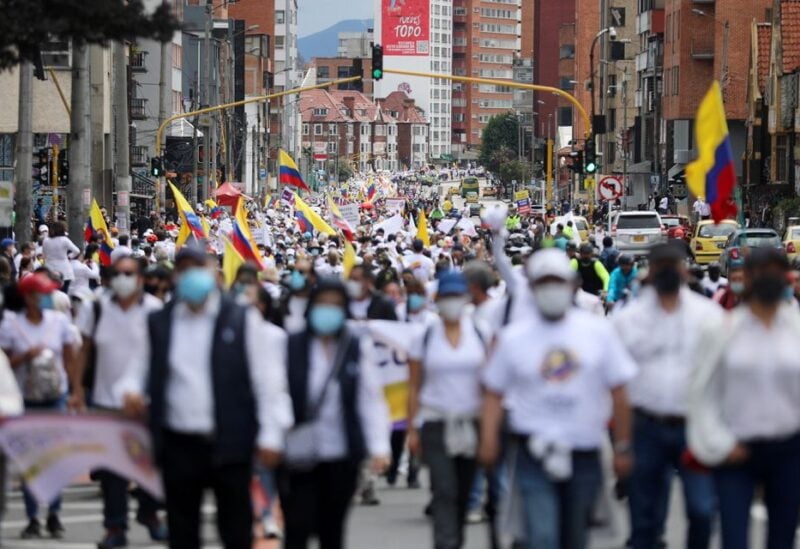 Waving flags and dressed in white, thousands marched in Colombia’s capital Bogota on Sunday to demand an end to protests and roadblocks, as well as to express support for security forces, following a month of demonstrations.

“They (the roadblocks) are taking the cities hostage. They are stopping the economy,” Patricia Gonzalez, 45, said.

The roadblocks have caused shortages of food and supplies in some parts of the country.

Though acknowledging the use of excessive force by some police, Gonzalez said not all police were corrupt and that the protests had gone on long enough.

Talks between the government and national protest leaders are to restart on Sunday, after stalling last week.

Widespread protests began at the end of April in opposition to a now-withdrawn tax reform but have since expanded to call for a basic income, opportunities for young people and to end police violence.

The month of protests have been beset with violence. The national government has so-far linked 17 civilian deaths and the deaths of two police officers to the protests, while rights groups say security forces have killed dozens of civilians.

In Colombia’s third-largest city, Cali, 13 people were killed during a day of protests on Friday, Mayor Jorge Ivan Ospina said on Saturday, stressing it was not certain how many of these were linked to demonstrations.

The United Nations High Commissioner for Human Rights, Michelle Bachelet, on Sunday called for those responsible for the violence in Cali to be held accountable.

“I call for an end to all forms of violence,” she said in a statement, calling for an investigation into the deaths and injuries.

While a “pre-agreement” to further negotiations was reached on Monday, strike organizers have since accused the government of deliberately stalling talks by not signing the deal.

The government says protest leaders must condemn roadblocks as part of the pre-agreement, calling the point non-negotiable.