Thousands of Tunisians rally against president on revolution anniversary 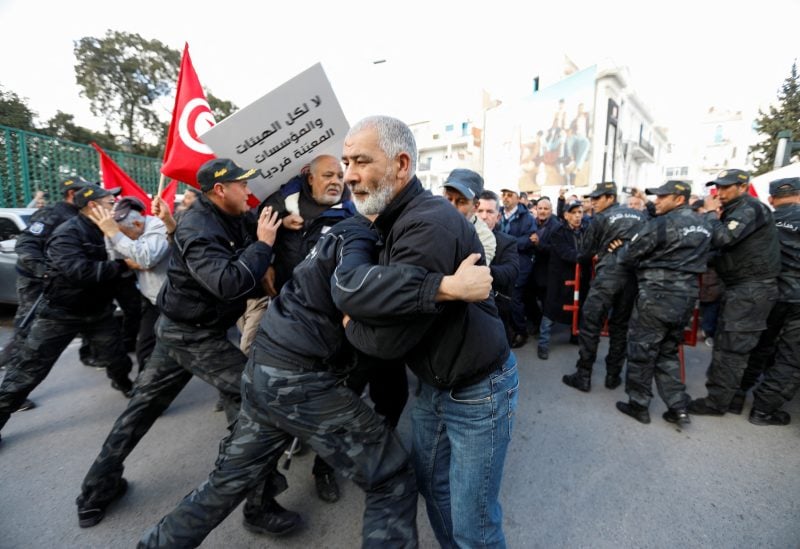 Demonstrators clash with police during a protest against Tunisian President Kais Saied, on the anniversary of the 2011 uprising, in Tunis, Tunisia January 14, 2023. REUTERS/Zoubeir Souissi

Thousands of protestors marched through central Tunis to demand the resignation of Tunisian President Kais Saied as they commemorated an important day in the 2011 revolution that brought democracy.

A Reuters journalist there reported seeing thousands of protestors carrying Tunisian flags along the main Habib Bourguiba Avenue, the usual location for large protests, as they shouted, “The people demand the overthrow of the regime.”

A heavy police presence remained outside the Interior Ministry building on the street, along with water cannon.

“Tunisia is going through the most dangerous time in its history. Saied took control of all authority and struck at democracy. The economy is collapsing. We will not be silent,” said Said Anouar Ali, a 34-year-old demonstrator.

Protesters had pushed past police and metal barricades to reach the avenue, defying initial efforts by the authorities to keep separate several parallel protests that had been called by different political parties and civil society organisations.

“We were on Bourguiba in January 2011 when Saied was not present… today he is closing Bourguiba to us. We will reach it whatever the price,” said Chaima Issa, an activist who took part in the 2011 revolution before the crowd pushed through the barriers.

Another major opposition political party, aligned with the pre-revolution autocracy, held a separate rally in downtown Tunis after it was banned from marching near the presidential palace in Carthage.

Saied shut down the elected parliament in 2021 and began to reshape the political system, but low turnout for December’s election of a new, mostly powerless, legislature revealed little public appetite for his changes.

Meanwhile the economy is failing, with staple goods disappearing from shelves, and the government has not yet been able to secure an international bailout with state finances facing bankruptcy.

The main political forces, including most parties and the labour union, now oppose Saied’s project, with many of them calling it an anti-democratic coup.

However, they have failed to repair deep ideological and personal fissures that divided them for years rather than forming a united front.

Many parties still reject a role for the biggest party, the Islamist Ennahda. The powerful UGTT labour union seeks a national dialogue but will not invite any party that accuses Saied of a coup.

The protests come 12 years to the day after the ousting of former autocrat, Zine al-Abidine Ben Ali, and Jan. 14 is seen by most Tunisian parties and civil society groups as the anniversary of the revolution.

However, Saied unilaterally changed the official anniversary date and has said he regards Jan. 14 as a moment when the revolution went astray.

While there has been no major crackdown on opponents of Saied, and police have allowed most protests against him, their handling of demonstrations on Jan. 14 last year was more forceful, prompting condemnation from rights activists.