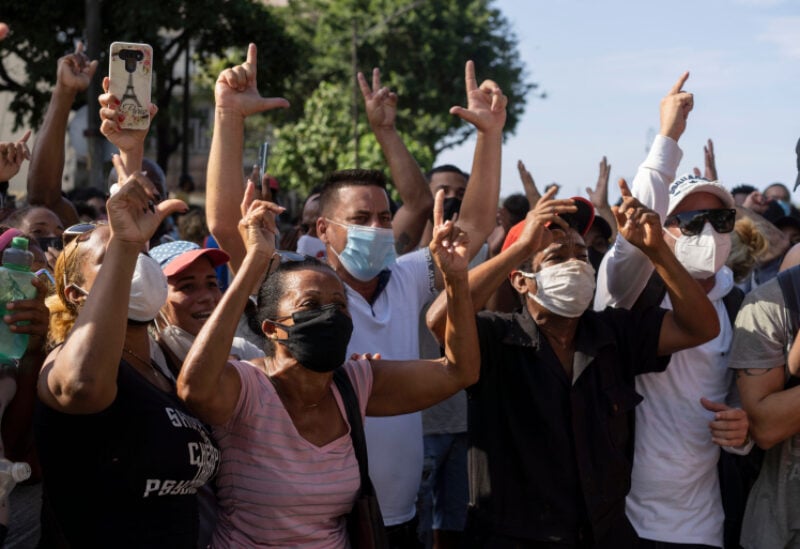 With more rallies held outside Cuba than those that took place on the island, Thousands of people across the world staged demonstrations against the Cuban government.
Demonstrators in the US, Spain, Argentina, the Dominican Republic and other countries took to the streets with signs demanding freedom and democracy and the release of hundreds of people who were jailed in July, when the island was hit by widespread anti-government protests.
On the island, some activists expressed their anger on social media that pro-government groups had prevented them from leaving their homes to take part in the demonstrations.
Jose Miguel Vivanco, the director of Human Rights Watch’s Americas division, said the Cuban government had deployed security forces “on a massive scale.”
“Many journalists and critics are under siege in their homes. Some have been detained. The intention is clear: to suppress any attempt to protest,” he said on Twitter.
Government dissidents organized by a Facebook group called Archipelago initially planned the rally for Nov. 20 but switched the date to Nov. 15 after authorities declared the 20th a “National Defense Day” during which citizens practice for an invasion by the US. Although Cuban authorities have banned the protest, the organizers decided to go ahead with the demonstrations. The protests coincided with the opening of schools and borders to tourists after long pandemic closures.
Cuba’s Foreign Minister Bruno Rodriguez described the call to march as a “failed operation.”
“Today we celebrated the reopening of the school year and international tourism after pandemics and quarantines. There are those who created other expectations outside Cuba, but they were left all dressed up for another party that did not happen because we Cubans don’t want it,” he said.
Cuba has accused the United States of organizing the demonstrations to try to “destabilize” the island by “altering the peace and security” of the Cuban people.
The US has called on Cuba to allow peaceful demonstrations to take place on the island.
“We call on the Cuban government to respect Cubans’ rights, by allowing them to peacefully assemble and use their voices without fear of government reprisal or violence, and by keeping Internet and telecommunication lines open for the free exchange of information,” US Secretary of State Antony Blinken said Sunday.
However, Rodriguez said via Twitter on Sunday that Cuba is willing to “defend the right” to enjoy the “advance towards normality.”
On Friday, Cuban President Miguel Diaz-Canel warned that his supporters were “ready to defend the revolution.” ​​​​​​​