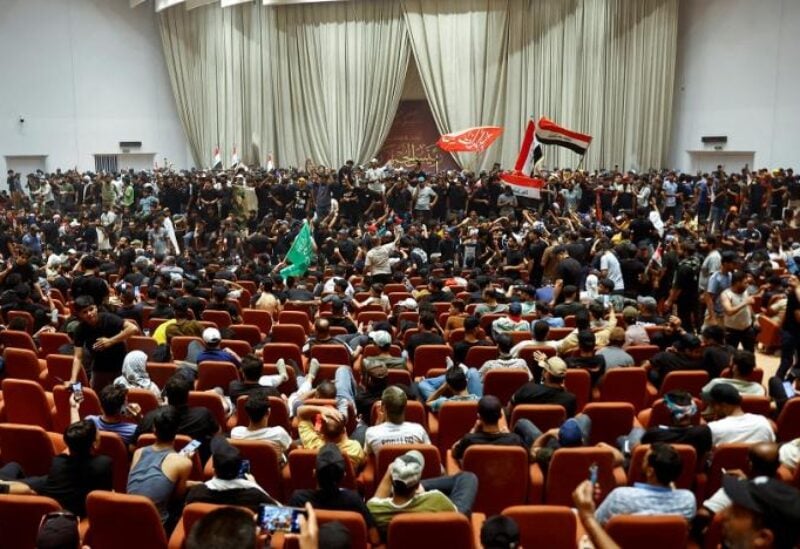 Iraqi security forces erected concrete barriers as panic took hold of the Iraqi street Monday ahead of counter-protests planned by Shiite political rivals that many feared could escalate to civil strife.

Calls for the counter-protest came from a political alliance of Iran-backed groups opposed to the open-ended sit-in inside Iraq’s parliament by followers of Shiite cleric Moqtada al-Sadr. The prospect of opposing demonstrations stirred fears of a deepening political crisis. Iraq’s political sphere has been a vacuum since federal elections in October.

The counter-protest was called for by the Coordination Framework, an alliance lead by Shiite parties close to Iran, and is slated to take place Monday afternoon. The alliance instructed participants to gather around Baghdad’s July 14th Bridge, which leads to the heavily fortified Green Zone where the parliament is housed.

The alliance forbade participants from entering the zone, directing them to “wait for instructions.” That signaled to protesters not to clash with Sadr’s followers, but opened the possibility of drawn-out demonstrations in a standoff against Sadr.

The alliance also called for its supporters to respect the state security forces and carry Iraqi flags. Security forces erected concrete walls blocking off the passage from the bridge to the Green Zone.

The announcement came after Sadr issued a statement late Sunday calling for “revolution” and to change the political system and the constitution and abolish his rivals while encouraging Iraqi tribes to join him. His opponents perceived that message as a call to a coup.

Fractures appeared within the leadership of the Framework, with some members unwilling to take part and calling for restraint. Others pushed for escalation.

Kataib Hezbollah, another Iran-backed militia group, has also suggested it will not participate.

If the protests escalate, it would be the closest followers of Sadr and Maliki will come to a confrontation since 2008, when the former prime minister lead Iraq’s army to drive the cleric’s previous militia, the Mahdi Army, out of the southern city of Basra.

The two men, both powerful in their own right, have been bitter enemies ever since.

Sadr’s loyalists continued their sit-in for a third day. Thousands among them stormed the parliament on Saturday, for the second time in the span of a week. This time, they did not disperse peacefully.