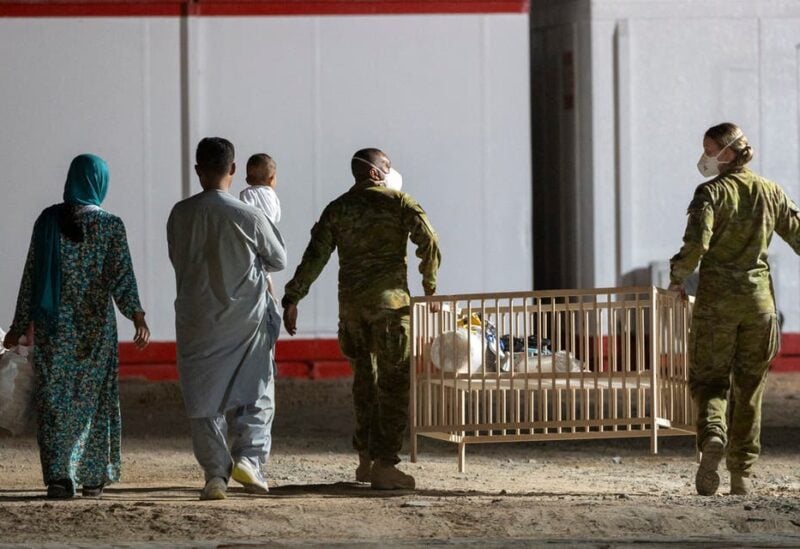 A handout photo taken on August 21 and received on August 22, 2021 from the Australian Defence Force shows people being escorted to their quarters following their evacuation flight from Afghanistan, at the Al Minhad Air Base some 25 kilometres south of Dubai. (File photo: AFP)

After evacuating Afghanistan, the first of about 3,500 people – mostly women and children – have left Australia’s mandatory hotel quarantine. They are grateful for their escape but worry about those left behind, an aid worker said on Friday.

International airlifts began on August 14, when the Taliban arrived in Kabul. As part of that effort, Australia evacuated 4,100 citizens and Afghans with visas, although some dual citizens chose to go elsewhere.

The first of the Afghan refugees are now beginning life in Australia. Assadullah Khurrami, a team leader at the Red Cross Humanitarian Settlement Program, said many carry deep scars.

“We have seen a few children who have come with heavy trauma,” Khurrami said. “The evacuees are very grateful… but at the same time there is a lot of desperation, a lot of sadness in these families, in these individuals, because they still have loved ones and family members left in Afghanistan.”

Khurrami – who fled Afghanistan in 2010 after working as an interpreter for the United Nations and allied forces in Afghanistan and came to Australia as a refugee – said the Western Australia community has offered aid.

“There are a lot of people in here who have offered to provide accommodation, provide material goods, provide psychosocial support, provide welcome meals,” Khurrami said.

Australia was part of a NATO-led international force that trained Afghan security forces and fought the Taliban for 20 years after Western forces expelled them from power in 2001.