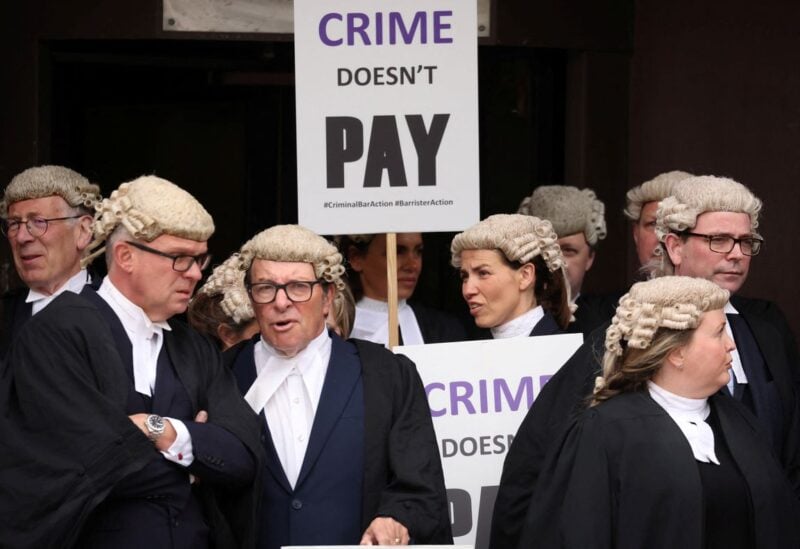 Barristers stand together during a strike by criminal barristers outside Liverpool Crown Court in Liverpool, Britain, July 4, 2022. REUTERS/Phil Noble

The Criminal Bar Association (CBA) said on Monday that lawyers in England and Wales who are involved in criminal trials have voted to start striking indefinitely from next month, causing more interruptions to court proceedings in a dispute over government funding.

Since several months ago, barristers in England and Wales have been intermittently refusing to take on new cases or cover cases for colleagues that have gotten out of hand. The CBA said that nearly 80% of voting members now supported intensifying that action.

They will now walk out indefinitely from Sept. 5, the day Boris Johnson’s successor as new prime minister is due to be announced.

“It is a decision to which we have been driven after years and years of abject neglect of the Criminal Justice System and the cynical exploitation of our time, effort and goodwill by successive governments determined to deliver justice on the cheap,” the CBA’s leadership said in a letter to members when the strike ballot opened.

The lawyers who act in criminal court cases say real earnings have collapsed, dropping 28% since 2006, with junior barristers earning a median income of only 12,200 pounds ($15,030) in their first three years, forcing many to give up their career.

The government had offered barristers a 15% pay rise, but the CBA has said the proposal would not come in until the end of 2023 at the earliest.

British courts already have a backlog of some 58,000 cases, partly exacerbated by the COVID-19 pandemic, but CBA say the justice system has long been in a mess because of a shortage of lawyers.

The strike is the latest in a wave of labour disputes in Britain, where rail, port and airline workers have staged walkouts as pay rises fail to keep up with soaring inflation that is projected exceed 13% later this year.