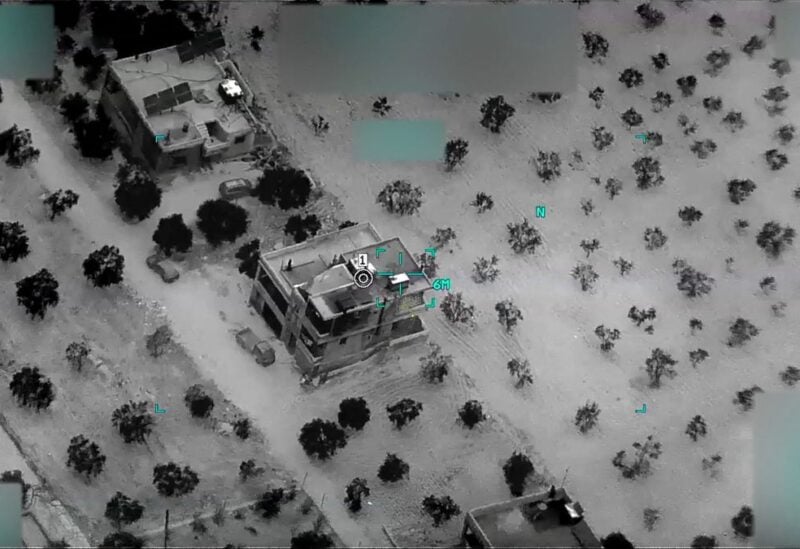 A suveillance image shows a compound housing the leader of the Islamic State jihadist group Abu Ibrahim al-Hashemi al-Quraishi, who had led Islamic State since the death in 2019 of its founder Abu Bakr al-Baghdadi, in northwest Syria prior to a raid executed by U.S. forces February 2, 2022. Department of Defense/Handout via REUTERS.

In July, the US military targeted Islamic State commander Maher al-Agal with a drone strike in northern Syria, with little chance of success. What’s the reason? Revenge.

With the Islamic State’s last battle-hardened forces holed up in remote areas, the US is turning to tribesmen seeking vengeance for the atrocities committed by the group when it ruled over large swaths of Syria and Iraq.

Still thirsty for vengeance eight years after the group, which is also known as Daesh, massacred hundreds of their clan, Sheitaat tribesmen in Syria had planted a tracking device on the motorbike Agal was riding when he was killed, one of the people who tracked him down said.

The tribesman, whose account was confirmed by a Western intelligence officer in the region, said tribal relatives in contact with the Islamic State commander’s immediate family had secretly been keeping tabs on him for months in northern Syria.

“I exacted revenge in blood for those of my tribe whom Daesh crucified, executed and beheaded without mercy,” the person, who declined to identified for security reasons, told Reuters by phone from Syria. “It has healed the burning in our hearts.”

In one of its bloodiest atrocities, Islamic State massacred more than 900 members of the Sheitaat tribe in three towns in Syria’s eastern Deir al-Zor region in 2014 when they rebelled against jihadist rule.

While Islamic State is a shadow of the group that ruled over a third of Syria and Iraq in a Caliphate declared in 2014, hundreds of fighters are still camped in desolate areas where neither the U.S.-led coalition nor the Syrian army, with support from Russia and Iranian-backed militias, exert full control.

The Arab tribesmen in Syria seeking vengeance are now part of a growing network of tribal spies playing a significant role in the U.S. military’s campaign to further degrade the group, three Western intelligence sources and six tribal sources said.

“These networks of informants are working with the Americans who are planting them everywhere,” said Yasser al Kassab, a tribal chief from the town of Gharanij in the Deir al-Zor area.

“Informants from the same tribe are tipping off about their own cousins in Islamic State,” he said.

Asked about the role of tribal informants in Syria, a U.S. military official said that in the operation against Agal, the targeting was almost entirely based on human intelligence.

“This is something that required a deep network in the region,” said the official, who declined to be named as he was not authorised to speak publicly about the matter.

The Western intelligence officer who confirmed the account of Agal’s assassination, and the lengthy period of tracking by tribesmen before the strike, has been briefed on tribal support for counter-insurgency activities by the U.S.-led coalition.

The U.S. military, which has about 900 troops in northeastern Syria, said Agal was one of the group’s top five leaders and had been responsible for developing Islamic State networks outside Iraq and Syria.

U.S. Central Command said at the time that the strike against Agal followed extensive planning.

With many of Islamic State’s foreign commanders killed or detained, Syrians have become increasingly significant in its leadership, making the militants more vulnerable to penetration by fellow Syrians keen to settle scores, Western and regional intelligence sources and three senior tribal figures said.

While four sources familiar with the intelligence gathering operation say money is sometimes paid for information, many informants are driven by revenge for the atrocities committed by the group at the peak of its power.

Some informants were being recruited by tribal intermediaries who were already part of the network. Others were contributing directly via a phone line set up by the coalition to receive tips, Sheitaat tribal chief Kassab said.

The U.S. military officer confirmed that informants were paid but did not elaborate.

The U.S.-financed tribal networks have penetrated Islamic State sleeper cells and compiled data on new recruits, who include fellow tribesmen in some cases, five tribal sources said. The three Western intelligence officers and a regional security official corroborated their accounts.

Many of the spies come from the Sheitaat tribe, an offshoot of Syria’s biggest tribe, the Akaidat, who fought with U.S.-backed forces to drive Islamic State from swathes of northeast Syria, taking the city of Raqqa after a long battle in 2017.

“They want revenge so they resort to cooperating with their relatives to leak information and give locations of leaders of IS. They use the tribal links,” said Samer al Ahmad, an expert on jihadist groups who comes from the region.

One of the Western intelligence officers said human intelligence – as opposed to information gathered from devices such as mobile phones – was now crucial because the militants increasingly avoid means of communication prone to surveillance.

“Most of the new operatives do not use mobile or gadgets that were behind the major past hits of foreign jihadists,” said the officer, who is familiar with some of the covert effort.

Such human intelligence has been “critical” in the drive to kill and detain top militants in Syria since the start of the year and played a key role in Agal’s case, the U.S. military official said.

“A lot of times, human intelligence is going to complement your other forms of intelligence, information you pick up from there or from voice signals and you can supplement it. In that case it really led the collection,” the official said.

Agal had been hiding in plain sight in northern Syria, spending most of his time in territory held by Sunni Arab insurgents backed by Turkey and mostly steering clear of areas closer to his home town where he might be recognized, two of his relatives said.

His death marked one of several blows against Islamic State in Syria this year.

Agal, Kurdi and the other militants who were targeted had slipped back into normal life, mingling among inhabitants of a heavily populated area along the Turkish border away from areas controlled by the U.S.-backed Syrian Democratic Forces (SDF).

The successful U.S. strikes have heartened Ahmad Assad al Hassouni, a senior figure in the Sheitaat tribe who is still searching for the remains of two of his four sons beheaded by Islamic State in 2014.

“They slaughtered my sons and burnt our hearts,” he said. “I swear by God I won’t sleep until the last criminal is dead,”

Although Islamic State increasingly lacks the capacity to stage large spectacular attacks, its presence is growing in remote areas of Deir al-Zor where control by the Kurdish-led SDF is shaky, residents said.

It was fear of a resurgence of Islamic State that spurred 32-year-old Abdullah al Omar to inform on his own relatives.

“I tipped the coalition about five people, including two cousins among my tribe whom we found out had been with Daesh, running checkpoints, burning homes,” said Omar, who comes from Abu Hamam by the Euphrates south of Busayrah.

“We cannot sleep peacefully at night because we know they are still there just waiting for the right time to take revenge and slaughter those who survived their massacres.”