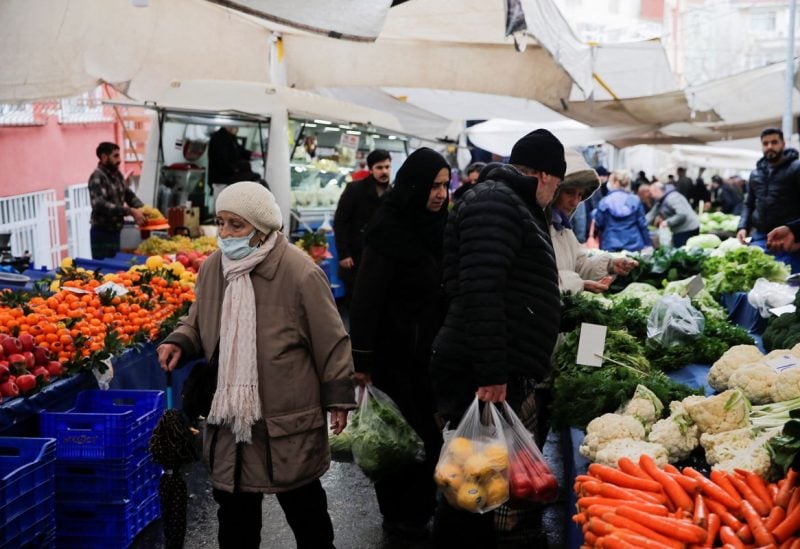 Annual inflation in Turkey is expected to fall sharply to 66.8% in December due to a favorable base effect, but only to 43.2% by the end of 2023, according to a Reuters poll released on Wednesday, while monthly price rises are expected to remain elevated.

The forecast for the end of 2023 is nearly double that of the government, raising the prospect of continued cost-of-living pressures as Turks vote in tight presidential and parliamentary elections next year.

Inflation peaked around 85.5%, a 24-year high, in October after rising for 17 months, mainly due to President Tayyip Erdogan’s unorthodox low interest-rate monetary policy and the resulting currency crisis last year.

Inflation dropped slightly in November and the decline is expected to become more pronounced in December, and in the first quarter of the year, when the surge in prices in the same period last year spells relief for this year’s annual inflation calculation.

In the Reuters poll of 12 economists, the median estimate for annual December inflation was 66.8%. Forecasts ranged between 64.60% and 69.1%, largely in line with the government’s forecast of 65%.

The direction of automotive and food prices could create uncertainty around the inflation print for December due to amendments made to vehicle special-consumption tax brackets in late-November, said Deniz Cicek, economist at QNB Finansbank.

Despite soaring prices, the central bank slashed its policy rate by 500 basis points since August to 9%, citing an economic slowdown. The easing was part of Erdogan’s economic programme prioritising exports, production, investments and employment.

The lira shed 44% of its value against the dollar in 2021, most of it during the December currency crisis sparked by last year’s rate cuts. It shed another 30% this year to historic lows, but held mostly stable in the last couple of months.

Ankara says the programme will help turn Turkey’s chronic current account deficits to a surplus, which it says will lead to a lasting fall in inflation.

However, economists see inflation dropping only to 43.2% by end-2023, according to the median estimate of eight economists in the Reuters poll, with forecasts ranging between 33% and 48%.

Ankara forecasts 24.9% inflation by end-2023, according to medium-term economic projections, and it does not see a current account surplus in at least the next three years.

The Turkish Statistical Institute is scheduled to announce December inflation data at 0700 GMT on Jan. 3.